I was wondering what to show for a wild bird.

I honestly did think I might have to resort to this little guy.  See him sitting on the hind end?  .. and try to get away with saying he was a cowbird.  But, he is on a bull... of sorts... you can tell by the horns...oh, and the big nuts dangling between his legs... not the bird's legs, the gas can bull.  You have to click on the pic to "biggify" to get a closer look. 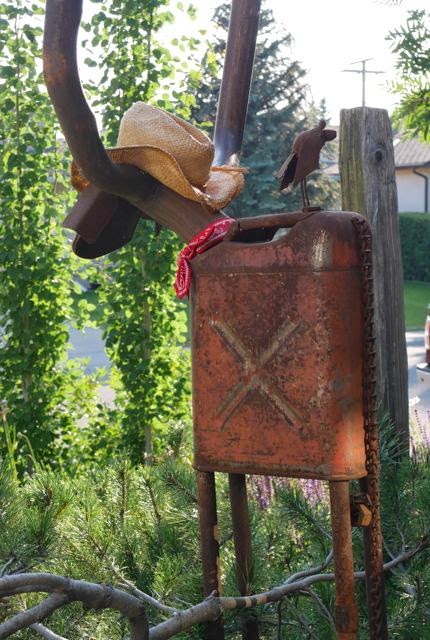 He is in a neighbour's garden... and, they had him "duded up" for the Stampede a few weeks back. 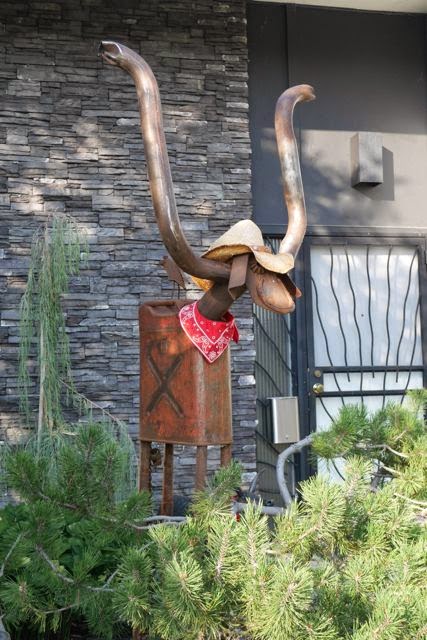 Thank goodness I didn't have to resort to that tactic... but, I just had to tell you about my predicament.

Anyway...I got lucky a few days ago.  Playing with my 'newish' camera and hanging out near our birdie bath... I saw this little guy show up. 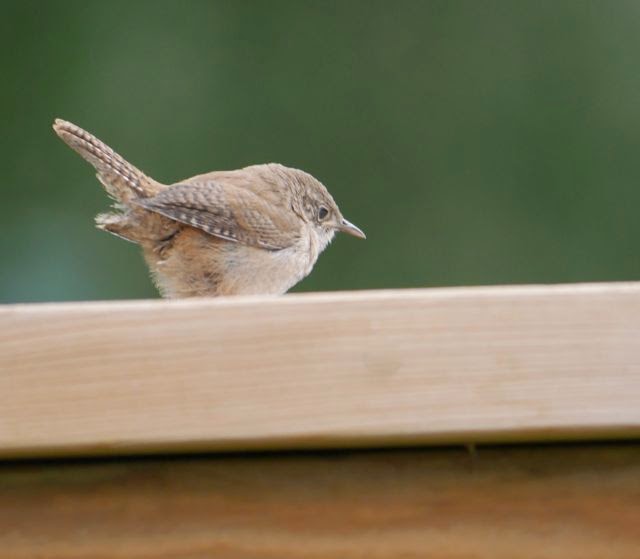 He flew away.  But, in hopes of him returning...I pulled a chair closer to the birdie bath ..and waited... sort of camouflaged behind the Caragana shrub.  It got hotter and sunnier and I was trying to be patient..but, my eyes didn't like it and, the skin on my forearm was on fire.  Finally, I stood up and just began to head for shade and a hat..when he flew in and sang out to let me know he had arrived.

Then, he hopped right over to very near where I was.. and, sang out yet again.  I quickly turned on the camera and snapped a few ..missed him totally in a few shots..but, got some that I thought were pretty darn good.  He was very busy ... hopping in and out of shrubbery and looking under rocks and bits of bark and even picking things off leaves.  Little insects I think.

I went in the house and pulled out the Audubon book and looked for something similar....

He is a House Wren.  They say this about him..

A plain brown bird with an effervescent voice, the House Wren is a common backyard bird over nearly the entire Western Hemisphere. Listen for its rush-and-jumble song in summer and you’ll find this species zipping through shrubs and low tree branches, snatching at insects. House Wrens will gladly use nestboxes, or you may find their twig-filled nests in old cans, boots, or boxes lying around in your garage.


I thought it a bit unkind ... a plain brown bird indeed!  Hmpff.... that's as bad as our Dad telling us kids we were "homely"..  just not right at all!  I think he is very cute and has the sweetest little song... at least they refer to it as effervescent.... okay then... maybe I'll go back to that site.  It is about local birds...

Here are two other pics I got of him... if you look close in the last shot you can see my reflection in his eye.... he was looking right at me.... 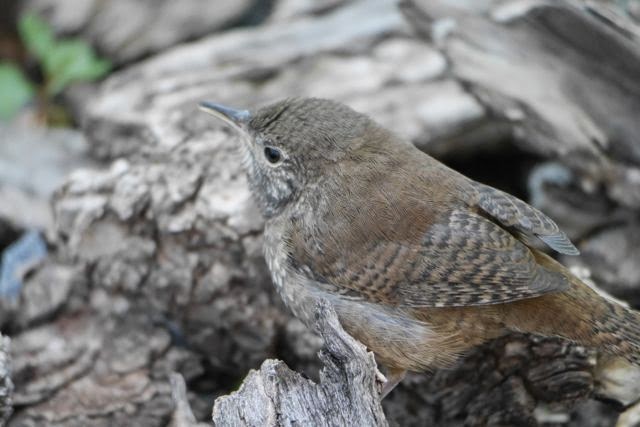 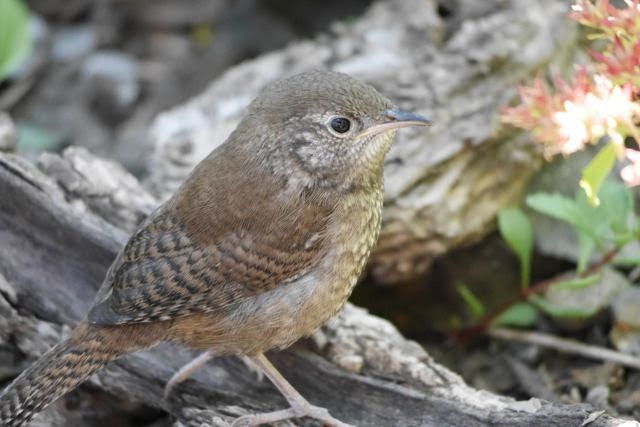 Check out some amazing birds and some even more amazing photography on the Wild Bird Wednesday site... these guys are real birders!  If I get a picture of a bird I don't know...they'll help.  I was happy to discover beforehand what it was. 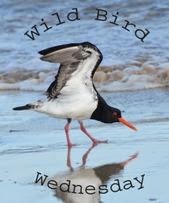 Posted by BumbleVee at 3:49 PM

What a sweet little wren! I agree, wrens are never "plain." They have so much personality--and I love to hear them sing.

Your photographs are great and it was lovely that he came over to you to sing to you. Couldn't see your reflection!!

Wrens are so lovely.We have Blue wrens in our Adelaide Hills, but gradually they are seen here in the plains. Glad all that waiting paid off.
Judy

Love the statue!!!
And love the wren too...a plain bird...I don't think so!!
Thanks for visiting my blog and commenting about the last gosling into the water!!!

Nice shots of the House Wren!

Aren't they cute. We had a pair nest in our garden this year. You are really good with the camera. When I try to take pictures of birds in my garden the bird has already flown by the time my camera decides to click:-)

After I got over my hysterical giggling over the poor bird with big nuts (how on earth would he fly?)...I loved seeing your wren pictures! They are such sweet little birds and have such a big voice for such a little bird.

Lovely little wren! Thanks for sharing your great shots.