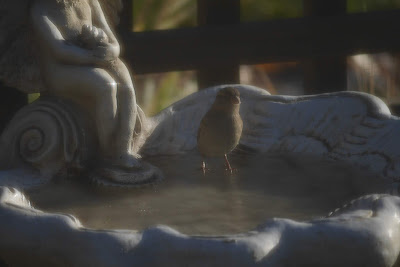 Not perfect photos as it was through the venetian blinds and screens, which is more or less the norm around here most days....

It is getting down to freezing temps. overnight now and the birdie bath gets frozen solid.  They come as soon as the sun is shining and hop around all over it searching for tiny crevices or eventually making a little hole to get a sip.

It's pretty slippery and they fall around... feathers stand on end...they do the splits...look pretty awkward and probably even stretch things they don't actually want to stretch... slide around a bit more and then.... leave.

But, they come back often to check for open water as the day wears on and the temps. climb to acceptable numbers ...like +15C... it's great days right now ... oh, to have it last until December..hahahahhahahahhah ...oh, sorry, lost my mind for a moment there.  As I'm sure you all remember, we have already had a huge snowfall to remind us of where we live.  That 17 inches melted finally, and hey!..there was still green grass under it.  Now it is more seasonable... like ...dying ...oh, alright, going dormant....and a bit more brownish with more coloured leaves on it and looks about ready for winter weather.  Almost.


Click on them to see a bit larger and more detail will also be visible ..even if it is semi fuzzy... 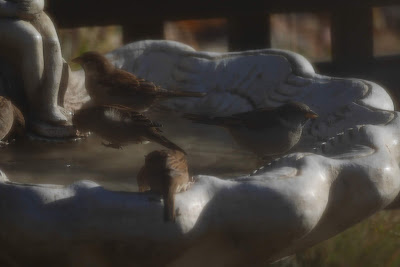 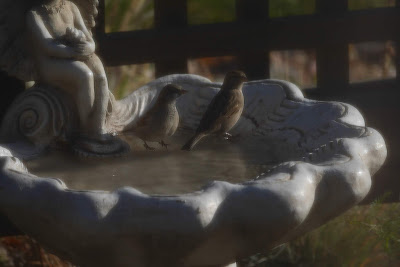 I never get pics of Blue Jays … people say they are brave, cheeky and all of that…but, I have not found it to be so.  Around here …they just land …squeak, see what is around, and fly off….
So, yesterday when I was trying to clean over a foot of snow off the patio wall and make a trail in there so I could get to the feeders…one flew by.  I set out some mixed nuts that I buy for the bigger birds and tried to lure him back.

He did come back. But, grabbed a nut at lightning speed and was gone!  Dammit.  Missed him.
So, I went in and sat by the window.. with the blind up a crack so I could get a clear photo.  He flew back about 15 minutes later… grabbed another nut at warp speed and …poof…gone again.  Nuts!!  Literally.  I wasn’t quick enough.
I waited.  And, waited.  About 10 minutes later, he showed again… this time I actually was ready and got a few shots..but just not as good as I wanted.  I hoped he would come again.  He did ..about another 5 later… this time I got one or two ..and off he went again.  The last time he showed up … he hopped around… looked right at me and hung out long enough to pose for me … the little bugger!  Taunting me…I know it.  He made me use up the better part of an hour hoping for his return.  Hhmppf…..
But, he is a beauty.  Well, I say ‘he’, but it could just as easily be a ‘she’ couldn’t it?  How do you know with Blue Jays? …. 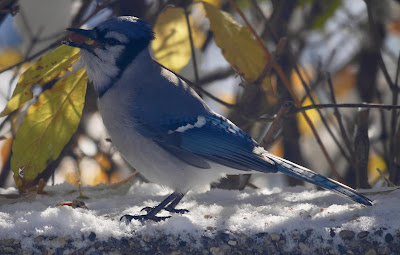 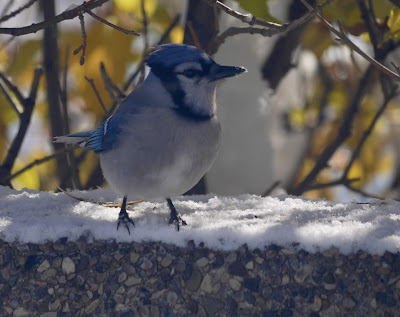 We had a huge snowfall... about 16 inches at our place.... the snow was this deep on top of the patio wall too..so I cleaned it off to let them have a place to sit.
It is too early for this much snow... all the tree branches were drooping from the weight of the snow on leaves that haven't even fallen off yet.  A disaster for many trees....
The guy was supposed to come and blow out the sprinkler system.... not for how long now I wonder?  It will take days for this much snow to melt..... and more is forecast for next week.  Darn it. 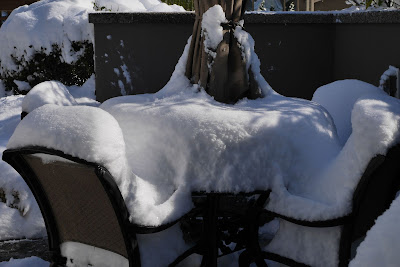