Some of you may remember my little story about a wounded crow that showed up in our yard in April 2015.  His one wing was almost dragging on the ground and he had a bad leg.  Poor guy was in a bad way.

I put out some food for him and he flopped over to get it and had a drink in my bird bath and hung around.....

Later, I noticed that he took food into a tree across the street and climbed up the branches like they were steps... hopping and flapping and managing to get up pretty high.... and then, sort of sailed across to the nearest tree without even having to really fly.  He and the missus had built a nest there... and for weeks he did that to help feed her .. he worked like a poor, crippled Trojan for weeks.  I almost cried to watch it.  And, I was damned if I would let him down...I put out food whenever he was on the ground.  It was my job.

He would sail down again to our yard and get some more ...as often as I would go out and give him some more goodies.  He recuperated quite a bit and the wing got stronger...he was able to fly short distances if he got scared or felt threatened.   His lady came down every so often and shared some food or visited with him and they sat together on the lawn or in the big tree across the street.

In the fall... she and the "kids" talked to him a lot in the Poplar... and maybe he even tried to go a short distance with them...but, in the end.... they left.  He was unable to go with them.  Later I noticed another smaller crippled crow would show up with him from time to time and then... when the snows came...they disappeared.  I didn't see him for months.  I read up on crows and discovered that they migrate to Kansas or Oklahoma from here in Canada.  Wow....that is a long way south of us.

The cripples and misfits have to stay and hang together during the winter if they can't fly south.  I had no idea if he would last the winter...it gets down to -35C and 40C  around here .... with plenty of snow... this year we still have 4 feet out there ....... but lo and behold... that first spring he showed up in the Poplar across the street...looking pretty darn good... and just hanging out.  I didn't realize for 3 days that he was just waiting for his lady.  Then, she and a few young crows showed up.. and he brought them all down onto the front sidewalk to show his family off and I tossed out some goodies and they all hopped around gathering up things.  They hung around for a day and then... seemed to disappear.

Later I noticed the two of them flying around, gathering twigs and building just down the street.  Apparently they don't use the same nest a second time..they make new ones but in close proximity to the old one.

So, this is the 3rd spring he has shown up and waited patiently for his lifelong mate to show up from her migration trip.  He was here at the beginning of the week... ... hanging out...waiting for his special lady.  I got a bit worried that this year she wasn't coming...but she showed up the other day... whew!

Last year some big usurper crow and his long legged woman set up camp in the tree across our back alley... I call him the Back Alley Crow... and he bullies poor Limpy.  Because he is crippled I guess.   So, poor Limpy and the Missus had to move further toward the golf course... and build there.   They managed to raise some more babies in spite of the ongoing dive bombings from the Bullies... and, they don't come to the yard much... as a matter of fact...I only got to hear him calling me from the tree every so often last year and sometimes when I went golfing...he hopped over to me to share my peanut butter sandwich.  He even recognizes me out of context.  Crows are soooo smart.

He was sitting on a big snowdrift in the front yard for several days til the bully came home from holidays...but, now... he only sneaks in on occasion.   It was such fun to see him peeking into the front window and sliding down the snowbank to get his little bits of chicken and snacks for the few days ...but, I miss him now as he has had to move a bit further away due to the antics of the bully.  If only I could tell them apart before I see my guy on the ground...I could toss things at the wrong "guy" ...but, I can't tell for sure til I see his funny 'hopping' gait ....


The first day I heard and saw him...last week... through the blinds... couldn't  believe he was there sitting on top of the huge four foot snowbank. 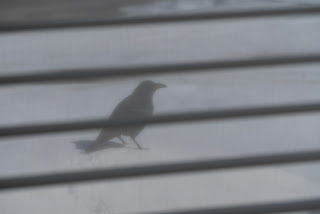 Here is the size of the snowbanks still around... 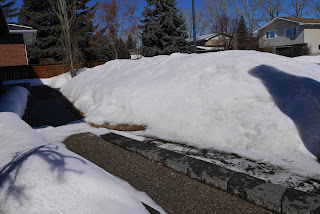 He soon had a little trail of footprints up and down the bank... 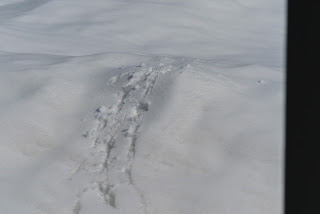 He had a few days of fun before the other bully crow showed up ... just ahead of his little lady, and then... they had to spend more time out of the front yard than in it.  He still shows up and lands on the privacy fence or the snow bank just to say hi and see if I sprint out with some bits of pork or chicken or some bit of something for him to carry off.
Limpy is a lot of fun. 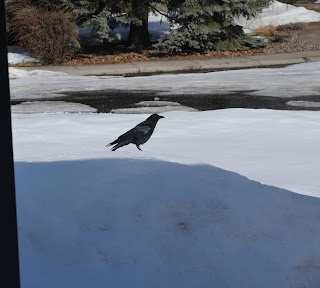 Here he is the spring of 2016 ...April.... peeking in the window when he showed up after being with the local group all winter... checking if I still lived here and wondering if I remembered I was supposed to toss out some snacks.  Cheeky boy!  Now each spring I look for him as much as he checks on me. 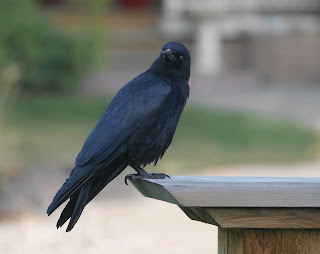 Last week I was going to post my photos of 'plain but pretty' House Sparrows as some other bird photographer called them.

Then I saw Brian King's images of House Sparrows and man... they were so beautiful.... I thought...hmmm....    I dunno.... mine are not that great in comparison.

It's lots of fun just seeing other peoples amazing, beautiful, interesting, or just plain funny birds.  I used to laugh out loud at Dave's photos.  He used to post the butts of birds... as a matter of fact...that is the name of his blog... Birds from Behind  .....   ... as that is mostly what we get trying to take photos of birds anyway.  They jump out of the frame at the least opportune time.  Sometimes we get a wing... a part of a foot...a butt....sometimes we get lucky on a first 'click'...sometimes you never get what you are trying for..... you get the idea.

Anyway... after all of that...I give you my lovely little House Sparrows.   My sister and I have decided they are kinda like us.  Our Dad used to tell us we were "homely"... miserable old shit.... our Mom used to tell us he meant "homey" to try to make us think he wasn't just rude.  It's okay... maybe we are sort of middle of the road looking;  even if one of his 3 girls was runner up to Miss Dominion of Canada one year ... .. feisty and fun .... and, on a good day, sort of cute.   I'll take that. 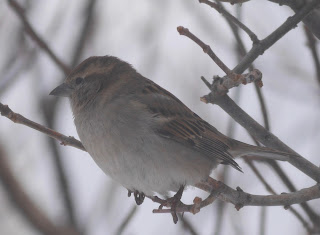 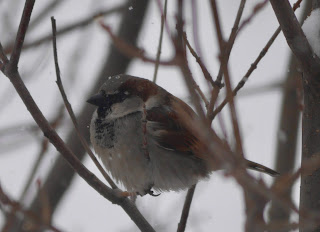 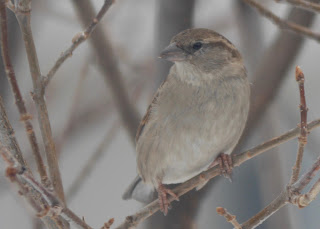 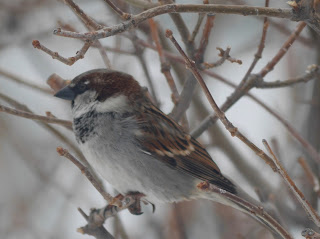 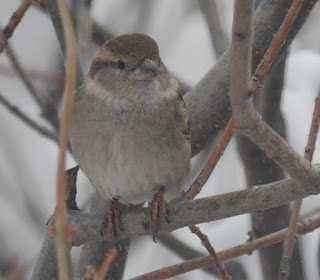 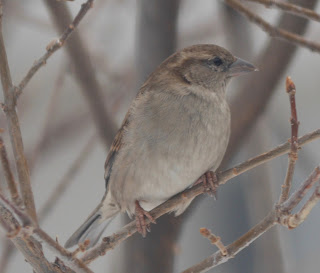 Linking up to Stewart's blog at Paying Ready Attention  .... where there are lots of lovely birdies to see ... 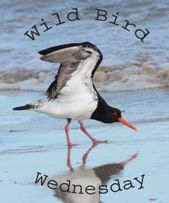 Another blast of winter around these parts over the weekend.... hours more of shovelling.  The piles are getting so high it's almost impossible for me to toss a shovel full up that high..and, when I do..it comes rolling back down to the bottom again.

When I visited my sister on her little farm, she taught me how to pile manure.. for making compost.  I decided I had to do it that way or it wasn't going to work.   Once it gets too high and pointy, it just doesn't work.  The horse poop balls come rolling right back onto your boots.

So, I had to push the shovel back and forth over the top of the pile of snow just like we used the pitch forks to do with the pile of poo ...flatten it out a bit and then..I could pile on more.  Then...more shovelling it back and forth...my arm was killing me by then.... so I could throw on more.  In the end...the piles are still 5 feet high..but, at least now they are also almost 4 feet across so I can still get a bit more on top.  If I could get out onto the middle of the lawn I could rake or shovel a bit more off the top towards the middle of the lawn and get them down a bit more...but, it is 4 feet deep on the lawn... I'm only 5 feet tall...forget it.  The sun is shining today... maybe some will melt... hahah yeh, right...it is only -12C..so maybe not yet....

I got a bit crazy and turned on the Christmas lights...which I have been unable to get off that bush,  seeing as that snow is pretty deep ...I was leaving them til it melted a bit more... now it snowed a lot more! 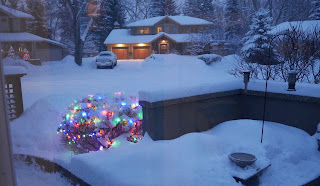 Click on the picture to see it larger so you can see details and see how deep things are.  I even had to make boot holes about a foot up my pile in order to step up to toss more snow on.  I had to shovel out the rather large patio because I have some morons coming on Tuesday to take away our granite slab to try to fix the ridiculous cutting mess they made of it last week.  Of course, this was after they assured us they do this all the time.  Liars.  I have no idea what is next if they can't fix their screw up.  As usual, for us...just one more bloody disaster after another with every.single.renovation we have ever done.  We were done with renovations remember? ? ... ..but, then..the oven conked out and we decided to replace it with a range because it was never supposed to be that close to a stove top .. a minimum of 12 inches apparently is even code and necessary so as not to cause damage to appliances underneath the stovetop.   No inspectors... no salesmen (of course) ...no installers...nobody ... ..nobody told us that 5 years ago when we did the last big reno.  We only noticed a teensy tiny line of print on some obscure size charts of the oven when we were measuring for the new range.  So had to have granite re-cut to accommodate it.  Don't believe anybody for a second when they say they do this all the time.   And, if you are one of the lucky ones who has actually had it done and got a great job?... good for you. 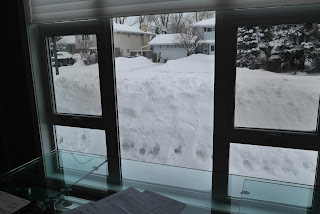 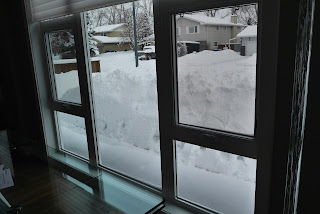 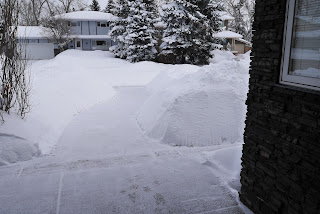 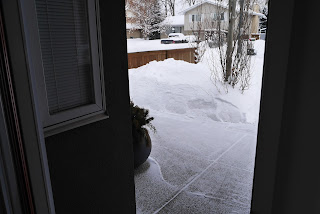