.... so, no golfing today.  Hahahha.... whew, finally a day off to do some housecleaning, laundry and stuff around here.  As you know, I lost two whole months to those damn injured ribs and now...  well, around these parts, there are only two months left of golfing season.  Arrrgghhhhh!!!  What a royal ripoff this year... missed most of it.  Next year I must. be. more. careful.  I want a whole season out there to see if I can improve my game and get more confident.  At the moment (for you golfers) ...my driver is working pretty good... but, my short game has let me down a bit.  Usually I am a pretty darn great putter and my chipping is good too..but, the long rough near the greens has taken its toll with chipping...and for some reason...I am having trouble reading the speed of the greens.  Oh, well...we know the answer.....practice, practice, practice.......

No time to bother with much blogging... it'll hafta wait til October at this rate.  Then, I'll have months to do that and other things that have been neglected.  Golf season is so short.. ... and must be utilized if at all possible.

In between golfing and yard work...I've managed to find a buyer for my motorcycle.... through a burly Harley guy that helped me unload the bike from the van when I had to take it to the dealership to have a throttle cable replace.  Sold our bike ramp too... to the guy that helped unload the bike.  He admired it and we said...it's for sale.  Sold!  ....and now ...we have helmets and other gear to sell and we will have finished with that chapter in our lives.  It was a fun ride....and Greg had fun racing....  til his accident.... but, moving on now that I know I have full blown osteoporosis and could break everything if I get hit or fall off......  my sister is happy that I will be safer on the golf course, I know..... although, with balls flying over trees from some of the long hitters...not always.....as a matter of fact..I might save my helmet and wear it while I'm out whacking balls.

Found this one morning while out watering before I left for a game....

Glistening like so many diamonds in the early morning sun...... 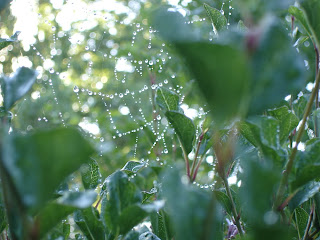 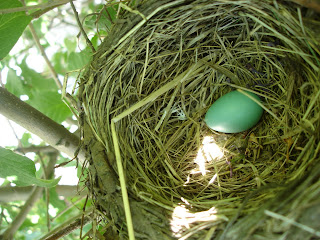 ..... I don't know exactly what happened here.  I knew the mommy robin was building a great nest...but, really I thought it was too close to the outside edge of the lilac bush.  Then, I didn't see her around for a few days and put my camera up at arms length to take picture inside the nest.  Only one lonely egg..... and now...nothing.  She hasn't come back.  I don't know if they just abandoned it after a particularly bad windstorm...or what.... nature is pretty cruel......
Posted by BumbleVee at 10:38 AM 12 comments:

... and, it took almost no time at all.  She is Canadian.... didn't have too far to come... and Shelly sent her Express... wow!.... it's always such fun to see things so soon after admiring them on a site.  Check out Gingermelon ....for a bunch of cute little bears, dolls and elephants too.

I used to have an elephant when I was just a tiny kid..... but, haven't had one since.... it's time.
And I promise I won't carry her around in such an unladylike position! 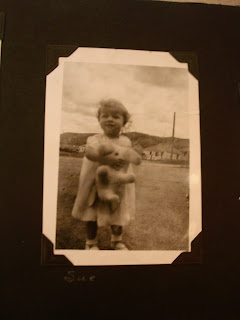 Here is my new little bear buddy, Buttercup.
She is softest pale yellow with yellow and pink tiny flowered fabric ears and body.  She has a little pink felty rose in her "hair" .. 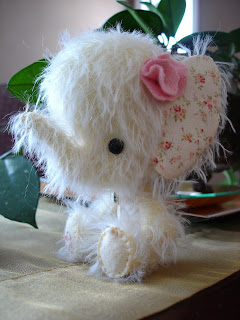 Her little feet are velvety soft and one sports a miniature heart of the same fabric as her ears.  Around her neck... a silver charm... a heart in an envelope.  Every part of her is carefully thought out and I love her. 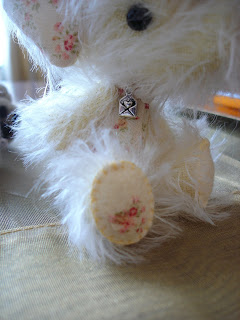 The TBs (table bears) engaged her in conversation the moment they saw her.  Scooter rode past regularly waving and trying to get her attention.... 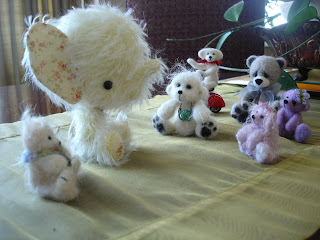 She's got a few inches on this bunch at 5 inches seated ...but, they said they will introduce her to the CBs (that would be the 'curio bears') tomorrow..... just for the heck of it....

Thanks so much for little Buttercup Shelly!
Posted by BumbleVee at 11:11 AM 13 comments: