He was totally wild at one time... only showed up to grab some food if it was put out (by my sister as she loves ALL animals.... and, tries to help them all.

She was finally able to trap him...but, he fought it all the way... you can still see scars on his nose  where he hit against the cage many times... but, the vet persevered and neutered him for her on a trap and release program their community has... he took off when she let him go and she didn't see him again.  Until a whole year later.

One day he showed up on her porch...looked at her through her screen door...said "meow"... and, sat down to stay.  She has four other cats.  They weren't exactly happy to share their porch with an interloper.... but, she makes them behave.

It was a long cold winter and she worried about him in the little shed where he had to stay... he can't be inside as Mister Thompson and Shadow are the live-in cats...and Mister is the elder statesman... it just wouldn't be right.  So, she put a cat door in the shed for him to go in and out... I think his big fur coat made it pretty easy for him to stay quite warm really .... but, still she worries.... when it gets down to -25C it's pretty darn cold out there.  Some days I don't she gets any sleep at all...worrying 'bout the outside cats.... people drop off strays and newborns all the time.  How can adult human beings be so stupid?  How many barn cats do they think one person can handle?  Why do they expect others to step up and do the right thing?  I'd like to do the right thing and get rid of some idiots.

Now that he has been around for a bit...he has turned into a complete softie... purring constantly, loving to be brushed and groomed by anybody and everybody.... well, except one guy he doesn't like. Wayne.  Bad Wayne pushed him with his boot one day... he doesn't really like cats.  Fluffy will never forget Wayne.  And, he doesn't forgive either. 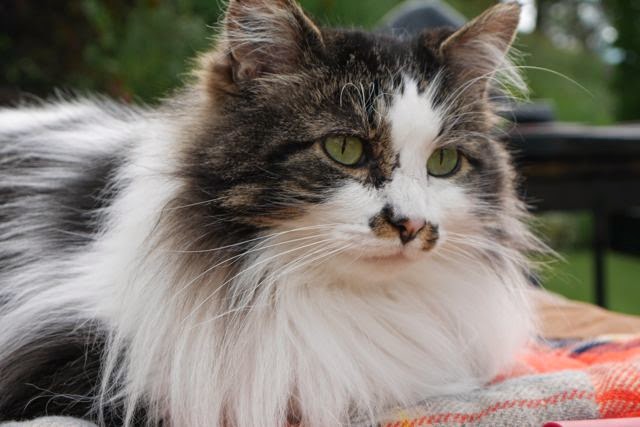 Posted by BumbleVee at 3:31 PM

awwww - who couldn't love that face? Maybe, come winter, he could have space in the basement instead of the cold shed.

Awww!!Your sister is a sweet Softie.You gotta love people like her. Love puss!!Glad he's tamed down, and can be the pet he wants to be. Nice story.

You are right, animals don't forget..they sometimes forgive but not forget. and they say they are dumb. ha. good story!

He is a beauty. Lucky Fluffy to know where to come for shelter, food and love. Cheers to your sister.