..... okay...  weird.  We always said it that way... and our Mom is English.  It's just that when I was saying it out loud, to no one in particular except myself, I decided to look it up....on Google of course, and in the rhyme, it is actually one ha'penny, two ha' penny.... which is a half penny.  Seems they are cheaper in the rhyme than they are in the song.. which was the next entry on Google.. at "One a penny'  Who knew?  I wonder if they even use half pennies any more... in Canada we are even giving up the penny.

Anyway.... you probably guessed right away that I was talking about Hot Cross Buns.  I made some  yesterday. And, yes, I know they are usually baked on Good Friday.  But, on that day I had company...and I was still not feeling up to par all of the Easter weekend... so I let it slide til now. 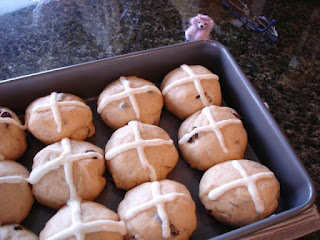 But, I had found a recipe that claimed to be great... tasting like Easter buns of old, and I really wanted to try those buns.  It's been a long time since I gave up on store made buns...ick.... they are terrible.  Funny texture... strange flavour... who knows what they put in them.... they get rock hard before they get mouldy.... forget it... I ain't eating those things anymore.

I wanted buns.  So...because I felt more like my old self...I baked yesterday. 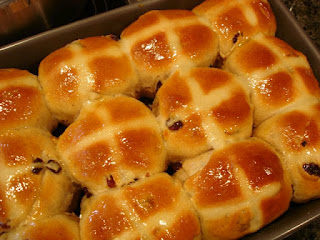 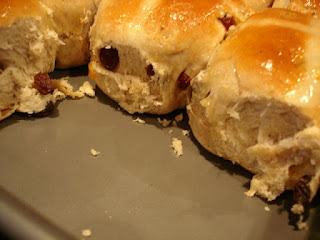 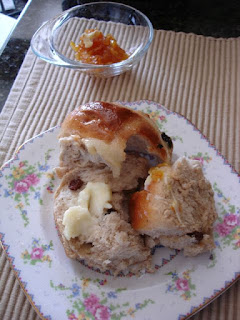 The recipe is in metric measurements...and I was busy trying to convert as I was doing it.... but, want to measure the ingredients a second time...then, will put it on my food blog.  I think it would work just as well for a raisin loaf..... yep...must try that next time.  Why should we only eat yummy stuff once a year? .... must be able to just do crossless buns or bread with the same dough....

Your hot cross buns look delicious, aren't they the best, home made.
The store bought just don't do it for me either.
I have a friend that bakes for a living and he sometimes put noughts and crosses on the buns.
Don't they smell divine cooking with the spices and yes, the butter on them when they are warm ...Yum!

No, it's one a penny etc. Really, take it from Brit who's mum also taught her it. It may be that it was a ha'penny about 200 years ago, but I've never heard that sung, anywhere. And we too gave up the half penny piece donkey's years ago.
Mind you, who am I to argue with God, sorry, Google? Anyway, they are glorious creations, and I'm so glad you're feeling a bit like yourself.

So I wonder how they are going to 'do away' with our penny? Are the stores going to round all the prices up? I really do like the idea. If something is $19.96 and I give them a $20 (although I hardly use cash anymore), I never wait for my change.

Yes we always say - one a penny, two a penny. Those hot cross buns look scrummy. I used to make them years ago. Bought ones just don't compare. The smell as they are baking is mouthwatering too. You might have talked me into giving them a go this week!! x Jo

Please pass some over here please. Just having my tea and I need those buns. They look delicious.

Yum Yum Yum:) Home made are the best because they come out lovely and soft. The OH bought some the other day and after he had one he refused to eat the rest. So, the birdies and my groundhog friend and maybe the bunnies has a feast.

Hi Vee,
Those hot Cross buns look yummy! I bet they tasted even better! I agree why do we have to wait until Good Friday to make them when you can enjoy them all year long. Have them whenever YOU want! :)
I'll come over and have some with you! :)
Hugs

Oh my, these look amazing; bet they smelled great too....
Wish I could have joined you for a cup of tea and a bun :-)
Thanks for the email...I'm thinking of you.
Hugs
Linda x