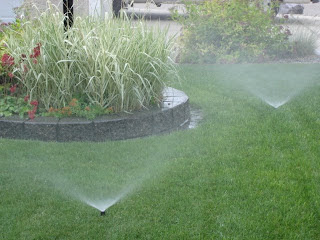 Yesterday the sky was grey and the day cool. Very cool. As a matter of fact it was only +8 C in the morning! Seemed like it was about the same in most areas of Canada... Johny Day in Montreal recorded huge clouds on his Flickr site... Susan in Nova Scotia showed miles of beach with overcast skies... dark, cool looking ocean..brrr... didn't hear from my sis in B.C>.... hope it was cool for her...they need some moisture and a cool day for sure..... it gets reeeeelllly hot there.

We needed a break from the hot dry days...and ..I needed..... a baking day! It was perfect. Definitely felt the need to warm things up a bit without turning on the furnace...hahahha..... and why not just turn on the oven? We were out of bread anyway.... so that was first on the list. Put on a sweater and get going. Well, first after going in and out to turn on and off each solenoid for the 5 watering zones in the yard and time them for about 20 minutes each. It needed water and who could trust the weather man? However, the auto pilot for the sprinkler system only did the flower beds for some reason...we must try it again next week to check out what happened. It may just be that the power outage a few days ago caused it to revert to an alternate program. So there was a bit of "inning and outing" for an hour. We always pat ourselves on the back about our irrigation system and how well it works... ...seeing as we did plenty of messy, dirty, hot, summer digging about 10 years ago.. and installed the whole system ourselves. The yard was a wreck and looked like giant moles had been hard at work trying to convince us to leave or something. So far it has been the only one in our neighbourhood that has worked properly. Service men are seen daily at all of the other houses that had them professionally done. And..even then... they come to us for advice when they have leaks. Huh?? As if we know what we are doing..hahahhah..... Mr. BumbleVee did study up on it as he does with all of our reno projects...but quite honestly..we just go by any info we get from the suppliers and the installers... and go for it. ..the same as with our drywalling, tiling, plumbing, , etc... however, I do say in the same breath that we go for it with great care and attention to every minute detail. Maybe that is the key. 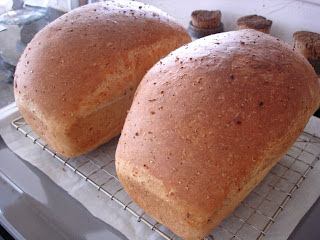 Anyway.... had fun mixing up a batch of multi grain dough... left it to rise...then on with some blueberry muffins... 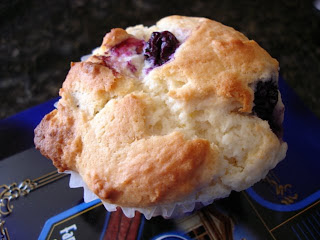 ... organized some stuffed eggplant for supper..then...well...then...I ran out of steam and had a nap! 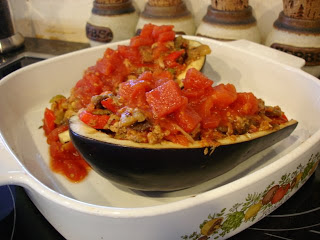 .... later, when I went out to enjoy the flowers and see if everything got a good soaking... I found this pretty little half of a robin's egg sitting on the Pink Chintz Thyme. Just turfed from the nest in the blue spruce I think...... It looked so cute, I just had to take a picture of it 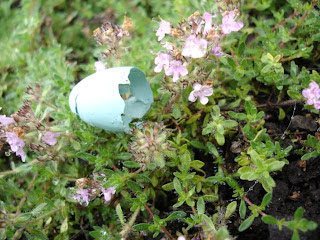 Bread recipe and more on my other blog...
Posted by BumbleVee at 9:12 AM

What amazing loaves of bread ~ I think that is one of the nicest smells coming from out of the oven.

I can almost smell that gorgeous bread! Yup, I am feeling the need for a baking day soon, myself. Doesn't look as if it'll be any time soon, though.

The sight of the hatched egg moved me, I so touched at the sight. I smiled when I read your profile, we probably have much things alike, and it excites me.

Have a blessed day.

Wow, all of this looks so delicious!