Hmmmm.... must not be quite as prolific or gabby as I first thought I was .... some folks are still not at their first year anniversary and have already posted a 300th entry!.... I better pick it up... hahhaha... or... not. It doesn't matter at all if we do it daily..or weekly... or whenever.... as long as it is still fun to do.

Yesterday was fun.... Maggi came to play. We do dolls, bears or other assorted crafty stuff together every so often. She is my sewing guru... seeing as I just learned to sew with a machine in the last few years..and don't do nearly enough to get very proficient at it. I have had this little pattern for years... just because I love Kimono and all things Japanese-y ..... but have never been able to understand the concept of the stitching explanation ... Maggi figured it out. 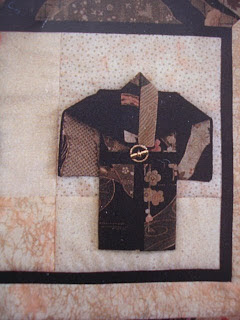 This is my little effort. 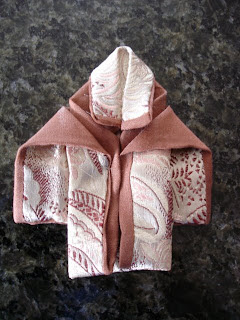 It is not quite as tidy as it might have been had I chosen a different backing fabric. The front is brocade and already has a tendency to be sort of puffy and not press well...but, then I chose a backing fabric that was pretty slippery on one side... just because I liked the colour combinations... and it was a b^*%# to try to press with the same size trim all along the length of the stitched piece. I want to redeem myself...and do another right away with something that is non-slippery! Sadly...I didn't think to picture Maggi's before she left. It was lovely colours...and perfectly even and pressed......

However, I do have these pics of a little dragon that she made for me! Isn't he sweet? He is not too fierce at only 3 inches tall...but I won't be sending him out on any knight searing jaunts anyway, so it's okay. 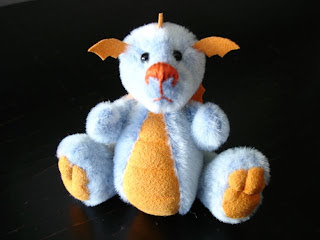 He will be sitting comfortably in my curio with a hug of little bears. 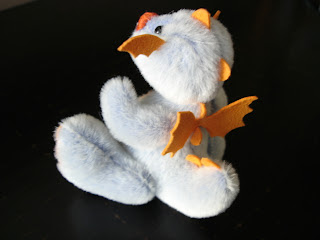 I love this little guy!
Posted by BumbleVee at 8:54 AM

Congrats on your 200th post! Hey, you are a more prolific blogger than I am LOL! LOVE that little dragon! Hugz, Laura

Hurray for your 200th post. Good for you! Love your little dragon and the kimono is beautiful. We judge ourselves to harshly...cuz we're women:)
Blessings,
Pam

Congratulations on your 200th post:-) As you say, it doesn't matter how often you post, as long as you're having fun doing it!

Sounds like you and Maggi always have a great time when you get together to sew...I so love those little kimonos! I think your first attempt looks fine...much better than I'd be able to do! lol Awwww that little dragon is so precious!

I so loved all your flower pictures in your previous post...I'm especially fascinated with the Pink Pixies since I've never heard of those before!

Have a great week my friend...it's 19c here so I'm enjoying the cooler air:-) xoxo

Congratulations on your 200th! You're right about blogging being about the fun and not the numbers. Love your kimono and just love the little dragon!

Congratulations on being a superblogger! What lovely pictures, all of them. I especially like the dragon's ears!

I love your baby dragon!! I am just learning to make stuffed bears and have made 2 so far. Where did you get the dragon pattern? (or did you make it up?)
I found your blog from the comments at Dilly's Castle, by the way! I love Dilly and her brother Bob T. Bear :)

Congrats on 200!
I love the kimonos, just Gorgeous!
Sandra Evertson
P.S.
And the little dragon, adorable!

this is my patch said...

We all blog for different reasons, but just as long as it is fun. Well done on notching up 200 posts! x

Congratulations on your 200th post! About the number of post, I think it's the quality, not the quantity that counts. Weee... glad that I'm here!

The kimono is amazing, great effort! Can't stop smiling at the dragon. =)

Congratulations on your 200th post!
I enjoy visiting your blog and there is always something lovely to see - thank you.

I love your little dragon and also the kimono ~
great work.

I look forward Vee, to coming back and seeing more of what you are up to.

Hello lovely lady. We are a bit worried that you are trapped inside our blog.
We love your dragons and your bears and we wondered if you have yet discovered her journal that started before blogs. And Her book called Can You See a Little Bear, which we think you might like, and te new one onDragons which has been so slow to hatch.
We wave our paws to you from the top of the green hill, over the sea. Fingers crossed for a full moon on a cloudless night tonight.
Best wishes from the gingers and the woman.
http://www.jackiemorris.co.uk/now.htm

What a wonderful collection of bears you have. Fun photos.

Congrats on 200 posts! Now who was it that you were speaking of in the first paragraph, hmmmm? ;.
Ha!

You always have called me a blabbermouth.

Love the little kimono and can't see any troubles with it, but I can imagine what a challenge it is to work on something that tiny. Love the dragon!

In reality,...I am pretty blabby myself... look how long some entries are..and check out my comments... very wordy.... verbose actually...

Congratulations on your 200th post! I hope you continue to write and post because your blog is one of my favorites to read. You keep blog so interesting by posting youir lovely creations, renovations, and your every day life.

I love your darling kimona, and the wee dragon is adorable. Will we soon see a little oriental bear wearing a kimona?

I like the kimonos. They give me such a serene feel. Be glad your not an OCD blogger. Its my boredom outlet and from the looks of my posts...I need to get a life. hahaha. I guess my world has changed now that my son has flown the coup. More free time and no direction in which to use it.
smiles
DarLy*~