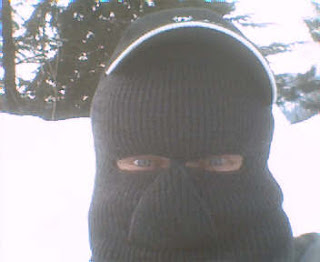 Oh, help ! Who ordered that? plus wind... seems the windchill will be -50C ... my brother the mountain man is even sending e-mail saying he is worried about me. Hahahha.... okay..I won't go outside. But... oh, yes...just remembered...silly me volunteered to shovel for the little old lady across the street for the next 6 weeks while her son in law is on holiday in sunny Vegas. The clever old weatherman is also saying there is big probably of snow as well. Great. Get out the balaclava, the long down coat, the Sorels, and ..oh, yeh..scarves, toques and earmuffs all at the same time. Nobody cares if you waddle around looking like a Stay Puffed marshmallow in this weather. 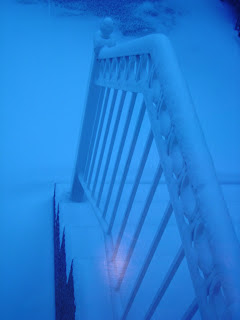 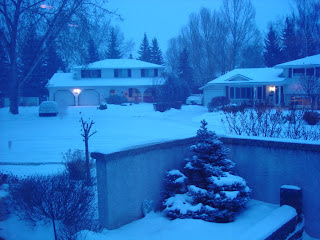 Did manage to get in a bit of sewing today... the FME took me much longer than I though it should...and I was actually sweating by the time I finished her tail. How silly is that? It is not as expertly done as Judi's...but for my first go round...I am pretty happy with it. I practiced for a bit and then figured I was wasting thread.. better just get on it. So I did. It seemed to be going along just fine 'til almost the last 4 rows of scales; then the thread really was causing problems. I did buy something called Sewer's Aid and had put a few drops onto the spool of metallic thread as suggested on the package ...and also a special needle... perhaps it helped. Near the end perhaps I should have applied some more... but just wanted to see it finished. I clipped off some of the bundled thread of the last tiny row...if it loosens I will just redo them..if not... good. 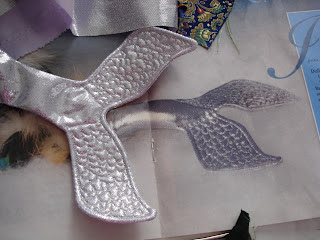 Also got sleeves and the parka hood done.. ... am awaiting some lovely fur from Alaska .... but in the meantime .. I still have to place some wire, then do a bit of stuffing...attach her head... and, oh, yes...hair..so plenty to occupy me for a bit yet. 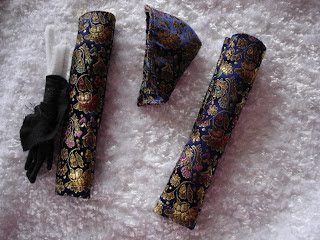 Posted by BumbleVee at 3:30 PM

I think you did a fab job of the FME scales. They aren't easy. One thing you could do is practice drawing the scales on paper so you have an idea of how the lines flow. A bit late now, yes, I know.

If you give her a full head of hair you'll have to enlarge the hood. I just did bangs - she's actually bald under that hood!! Shhhh. Don't tell anyone!

Hey Judi...can I come play dolls up there where it's warmer then?

yeh...no worries..I did make the hoodie a bit larger anyway...but still will just give her bangs...

okay then...next tail..I draw on some scales... This is one little dolly that I may think about making a second... although I have never made more than one of any others...so can't say for sure I suppose. Maggi always says..no seconds...movin' on... hahahh ...

always wondered what a balaclava was...keep reading about it.

Your mermaid is coming along beautifully. Love her tail, and the fabrics you are using. I am
anxious to see her all done- she is going to be gorgous.

Thanks for Full Dose award. Perhaps it will inspire me to blog more and better stuff.

Brrrr it looks cold over there, best to get some thermals for shovelling!

Your mermaid looks like it's gonna be fabulous, it must have taken hours to do that tail... beautiful.

Do like me and hibernate today! lol We're in the midst of having high winds and blowing snow right now. At least we didn't have it as cold as you...today it's -9c here. It always makes me smile when our friends south of the border wonder what balaclavas are...I remember as children me and my 4 brothers had one to wear for walking to school in frigid temps. Your mermaid is going to look fabulous...I can craft but sewing is not something I'm good at, hemming pants is about all I do with a thread and needle! lol xox

me too Pea... believe it or not..I had to take up sewing just to make dolls! I struggle along and my friend Maggi, who is a great sewer, has laughed with and at me..seeing how little I actually know about a sewing machine. But...I took some lessons... bought my very own machine..and, now... I am sewing with it! Of course, I am still learning plenty, ... cuz I sure don't know much about it.