The guys are still on the windowsill... Bernie sometimes gets the 'blurs'... kind of like me... blurry eyes .. I know... it sounds like it should be "Bernie gets the blues".  but, no.. this is different.  His eyes get blurry watching for kids to walk past so he can wave at them.
This is what he saw the other day.. and wondered why there was another bear just like him outside in the tree..well, it looked like he was in the tree to Bernie.... 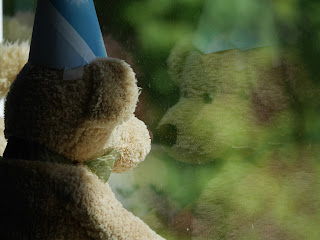 Sometimes he gets tired of sitting there being a good boy and ..well, he gets into mischief.
Like today... when he found a cowboy hat and decided to ride Dude, our little dog that is made of pieces of tree....we got him at a farmer's market years ago.  Poor Dude... didn't have a clue what Bernie expected him to do ... sitting up there yelling "giddyup" .. "yeeehawww... let's go little bronc" ..   Dude just stood there. 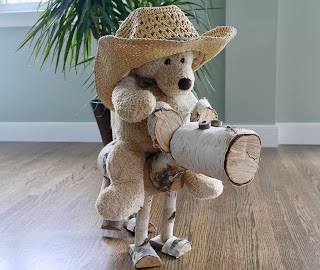 Hello:) Nice to see you in Blogger land again. Happy Canada Day too :)

Ha ha - lovely photos! Sometimes you just have to let the bear do his thing! x Jo

Yea! You are back! Funny...I just happened to click on your blog today....

I want things the same too. I want to be healthy, feel strong, be worry-free (wait...I wasn't that before!), be safe going outside my home, and to keep my family safe too. Is that too much to ask? Oh wait...I want to add that I want my country to get it's "stuff" together too. Gosh, things are stressful these days.

Hope you are well and at least having some fun like Bernie!

Looks like Bernie is having fun in between waiting for kids to wave at him. (ps. glad you see you're back!).

ahh this is cute. Good to see a post. I checked a few times and was hoping you would post again.