My birdie feeder is such fun... and, it is collecting quite a few visitors... mostly sparrows...but, hey I love all the little guys.

But ... the other day, a larger, brown form swooped in; touched the feeder briefly with a foot and then..landed on my cupid's head on the bird bath.  Yikes!!  I've created a hunting ground for hawks!!

I quickly went to the window and was going to open it and shoo it away...but, Mister BumbleVee said ...don't scare it away.... get a picture !!  I grabbed the camera, which was on the table ... fumbled with the venetian blind in the window and managed to get one.... luckily he was totally intent on staring at the sparrows in the shrub.

All the little guys disappeared into the middle of a Korean Lilac bush... and, even though there are no leaves left on it... the tiny branches protected them....no way that guy would fight his way into that bush. 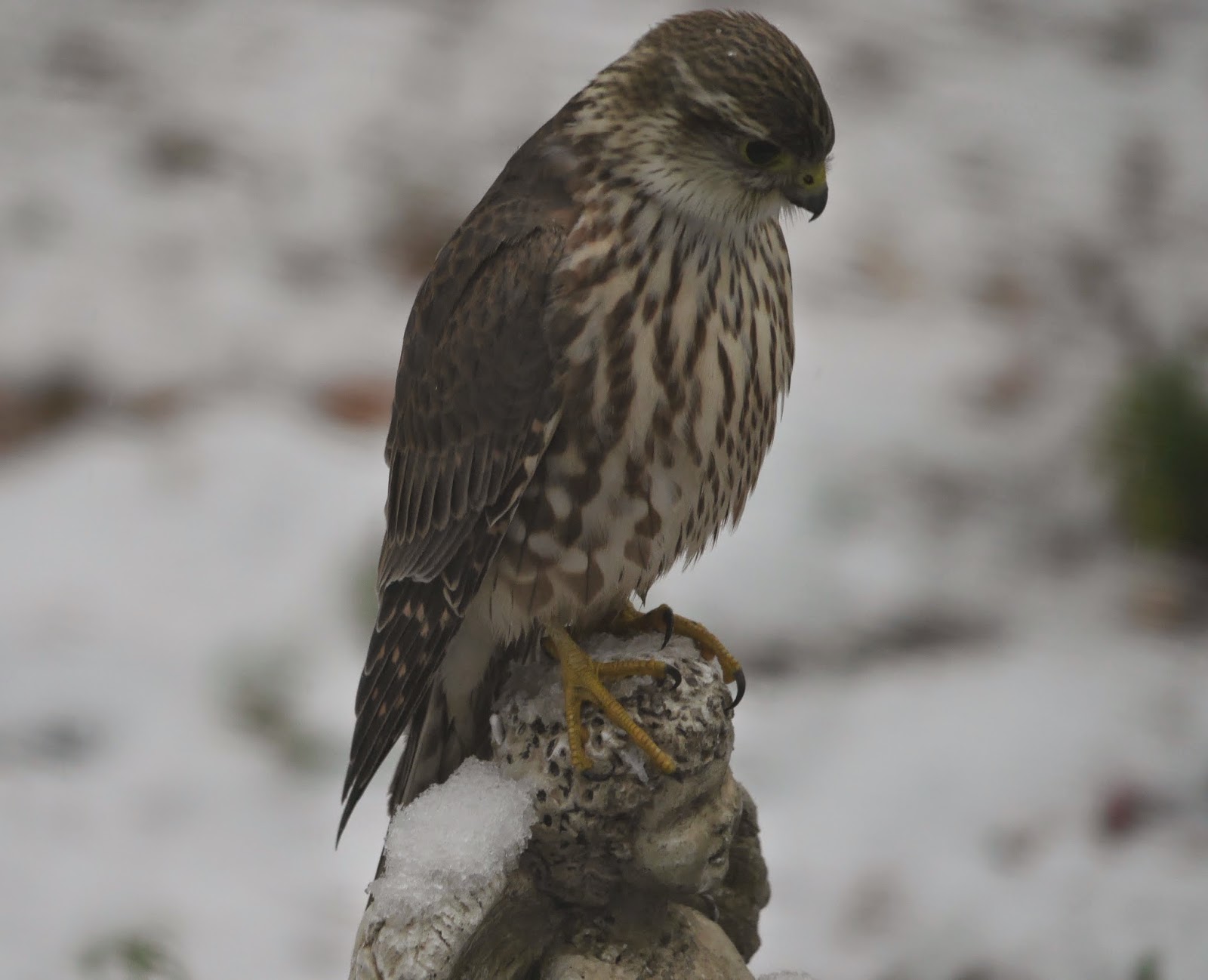 And, here is a shot of the bird bath with the cupid in full view and sparrows near it for a size comparison.. 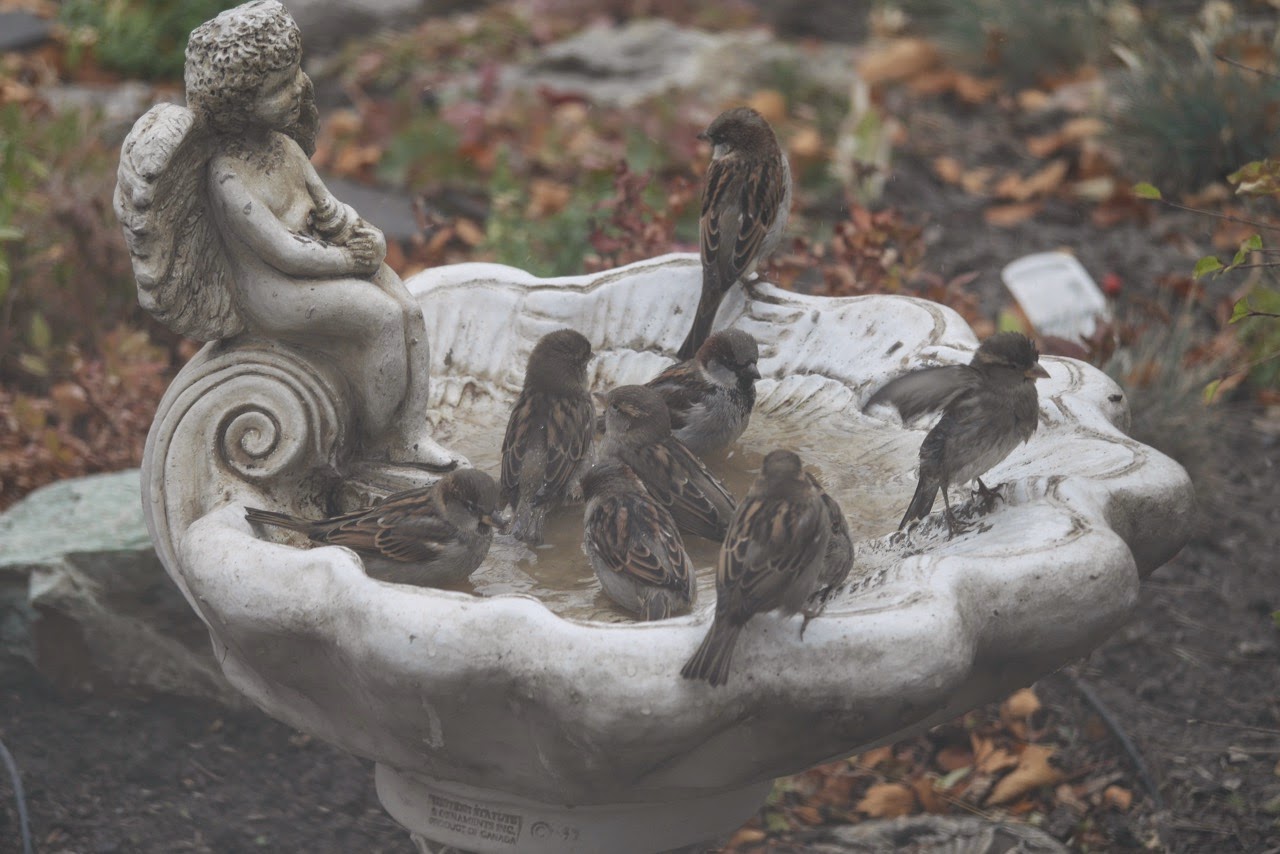 If you would like to join in or just have a look at lots of other birds .... go to Wild Bird Wednesday to check them out. 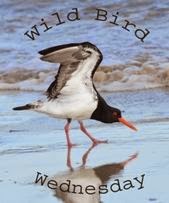 Posted by BumbleVee at 2:47 PM

He's stunning! I can't get a shot from the window when a hawk comes hunting in my yard. But I actually had a Coopers go INTO the Texas sage bush after the birds! It must have been a young one. You got a great photo!

Nice nice nice!!!!! That my friend is known as a Merlin! Yeah it's pretty magical. Congrats! And gorgeous shot!

It looks like a Kestrel, but you live in a place that I don't live, anyrate, it is beautiful photo.

From over here in the UK, that looks like a Merlin. Nice shot.

He's a Beaut, Vee! What a great shot. He was intent too wasn't he. We had a Shrike steal a little Junco from our Feeder last Fall. I guess they have to eat too, but it still bugged me. I felt responsible 'cause I put the seeds out for the little birds. But really the predator birds would try to get them anywhere they gathered. so at least the rest of the time the little birds benefit ... and us too by watching their antics..
Thanks for the great shots!

From over here in the UK that sure looks like a young Merlin. A good photo.

He's a real beauty and my money would be on a merlin from the size asd chest markings. A lovely find

I'm glad to see you got your bird ID'd. This is a hard time of year to identify some birds, the adults lose their breeding colors and the young don't have all their markings yet.
More birds will survive since you feed them, and raptors need to eat, too. I don't like seeing them get my little buddies though. Coopers Hawks are the only ones I've seen in our yard. They usually go for the pigeons--and there are plenty of those here.

You are so lucky to get different birds in your feeder. I only seem to get robins, blue tits, sparrows, and finches, and oh yes squirrels and magpies. 😄
Your bird of prey looks lovely and certainly have got a great shot. He very much looks like a recently fledged bird but I am not sure so those who are experts will be able to tell you more.

Great photos of the sparrows and the Merlin? I wouldn't know what the larger bird is - birds out here in Aus. are quite different - except for the sparrows of course! I hope they don't eat up everything and leave nothing for the other small birds! Thanks for your comment on my blog.

Merlin it is and a wonderful bird, congratulations on this image

He is a beautiful bird and we're glad he didn't get any sparrows! It's snowing already in your neck of the woods? Whoa!

Beautiful or not...I do not like hawks feeding in our yard. I chase them away when I can...although they sort of just ignore me. That said, they do sort out the sick and elderly birds, and they do eat everything (leaving behind a huge mess) and I guess that is the circle of life. Unfortunately.

My first thought when to Merlin - but as a few other people have said - thats a bit of a guess and well outside my normal birding experience zone!