Usually a bit more tricky than it looks ... for me anyway....

...maybe just one size smaller would work better.  I seem to be awkward at it and it is a struggle to get it how I want it.

Bent into a shape for Ms Goosie's feet ... I was then hesitating as to whether to just put on some felt as called for in the pattern...or go for the gusto and form some Apoxy Sculpt into great feet... as Maggi and I decided, and she has already done. ...(she's a lot quicker than me at doing any of it...and carries on between visits... I seem to be lazy or something..) ...  somehow I just never find much time to work on anything crafty these days. 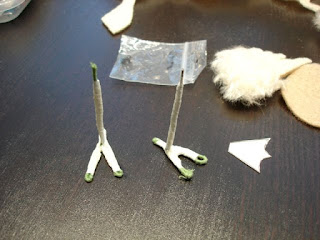 Organizing, still trying to choose kitchen tiles...which by the way...I HAVE now!  woohoooo ..... must tell the contractor because it takes 5 weeks to get them!  acckkk!

And, then...I had to fix  my mixer.  Can you believe all this time I was dissing my Cuisinart mixer.. because it didn't pick up whatever was on the bottom of the bowl?  Some of you are probably already saying....she should have read the instruction manual.  No??  Well, I should have.

There it was.  In black and white. The solution to the problem.  Which by the way.... I found out from somebody's blog while reading and surfing ...   and it wasn't even to do with that.  But, on a bread baking forum ...somebody mentioned how to fix a Kitchen Aid mixer having the same problem.   I had always been whining about not having my little Kitchen Aid still...as it was perfect for that very thing.  Couldn't believe it when somebody complained about hers..and I had to read on. 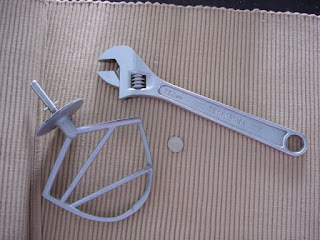 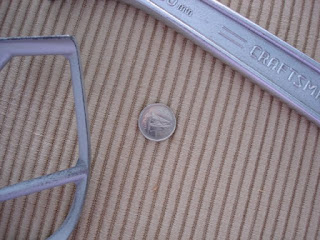 After loosening the nut... give the top post of the blade a turn ... tighten the nut again, insert the blade, and put the dime in the bottom of the bowl. Turn the mixer on at 2 ... if it doesn't even touch the dime yet...which mine still didn't..... take it out, loosen the nut again and try another quarter turn or so.... reinsert and try again..... until it moves the dime a bit on every swipe past it.

I actually had to turn that post so that several threads became visible.... as you can see in the photo ...in order for it to even touch the dime....so it was short of the bottom of the bowl...allllllll thissssss tiiimmmmmme!  mutter...mutter........ *&^%....
No wonder it didn't mix as well as it should.  It couldn't even touch the ingredients.

Several years now since I gave away my trusty KitchenAid mixer and bought this new one.  All the time I have been wishing it would give up the ghost so I can treat myself to a new yellow mixer.
NOw what? ....it may go on forever ...grinding and clunking and being downright noisy...but, working perfectly.   I want a new pretty, yellow, quiet KitchenAid mixer.

Maybe when the tiles are done....I'm gonna treat myself. 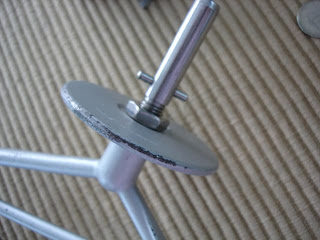