Where it all began...

Thanks for all the good wishes on our anniversary... the blog's and my own.... it's been a fun week.  I went back to the beginning and read forward several posts.  It was interesting to see what was happening during the week. I was dealing with my bad ankle.. having aggressive physio...which in retrospect was sooo wrong, because I subsequently learned I had several fractures in the foot.  Physio stopped abruptly and everybody looked ridiculous in my eyes. This year I've been whining about my wrist/hand since December .... hmmm.... don't think I'll bother with physio just yet. hahahha....


One of the other gals did this for her anniversary date and I'm a great copycat. I missed the actual date...but, it is still the week of.... and, oh, hey! look.... I had bigger font then. I guess it might be easier to read after all.  It was the fault of the gang at the Teddy Talk site as I recall.  Somebody decided we should all start blogs.  Several of us did (and let me tell you, it was a lot of bumbling around for me to get it all organized!!  I'm no tekky) Some of those gals and a guy or two are still here in bloggyville. Most fell by the wayside by the end of the first week.... many other bear makers have definitely joined in now...   there are lots of great bear making sites to visit. 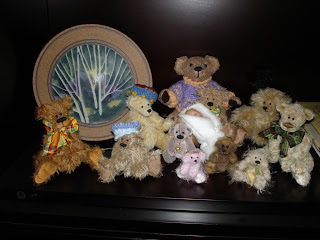 So.... I bumbled around for a bit and now.... the glass is shiny. Look! you can see all the little guys on one of the shelves! The Bearister Bookcase is officially open for business. Okay...well, not really business, but you get it...peek in and check out my bears and dolls ....oh, and a ton of other stuff I might have on display from time to time.
I will eventually offer plenty of info, tips, techniques and tricks that I discover during my travels through other sites and from members of groups to which I belong.

Don't think I'll bother too much with the finer points today....it will suffice that I have a nice quiet template, (although I will jazz it up a bit some day too, and add lots of pics )... a heading and description...as a matter of fact, I think it's time for a nap.  That was just about enough for this Bumblebearie on top of almost 2 hours of physio for my ankle.

Better get some cheese on the lasagna first though.... ...oh, yeah... once we get going you will see that I also like to cook and bake... Hey!! I could have called it the Bearister Bakeshop ........where the dolls and bears could all sit around the kitchen table, dipping cookies in their tea while I stand at the stove baking more. Uhm...no...changed my mind.
Posted by BumbleVee at 10:44 AM

I hate cooking but I love dipping cookies in my tea!

Did somebody mention lasagna?

I'm still trying to work beyond the photo of the chocolate-dipped strawberries and chilled wine (great photo lighting).

Congratulations on reaching three years with your blog. I started running out of ideas after the first month.

Happy anniversary times 3 for the blog and times X with the Mr.

P.S. I'd go with blogiversary.

Heavens...didn't they X-ray your foot first before they started physio on it?

Lovely post, Vee....enjoyed the trip back to 2007 and I'm so glad you stayed in Bloggyville so I get to enjoy your wonderful blog ~ :)

I think reposting your first is an excellent idea! Congrats on the anniversary :)

Hopefully here's to at least another 3 more :)

Isn't it wonderful to walk down memory lane sometimes.