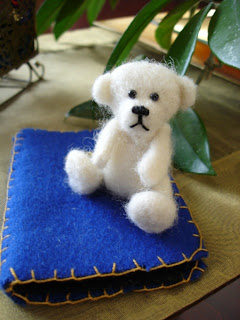 This little guy is not one of my bears. But, he sure does look remarkably like one of 'em.
A lady up the block wanted to learn how to make a felted bear...so we spent a few hours stabbing and I showed her what little I know..... then off she went to work on some bear bits for the week. She embroidered a little nose..made arms and legs and got some ears on.. we got together again and string jointed him... he posed for his first photo.... he's great! She named him Leroy and went off home mumbling something about making him a scarf or perhaps a hat... hahahha...she's hooked !
When I made my first bear it looked like a monkey. I kid you not. I was recuperating from carpal tunnel surgery... couldn't do any hand stitching on my mohair bears...and so was surfing the net just admiring everybody else's work and checking prices on e-bay. One day I saw a little needle felted bear made by a guy in eastern Canada... it was sooo cute. I decided to put on a bid....I got him! My first needle felted bear.... I could hardly wait til he arrived. When I opened up the tissue.. there he was... even sweeter than his photos.. I carried him around all over the house like a mother cat with a kitten... I couldn't get over how tiny and cute he was. He was so soft...very gently felted.. I had to have more. So, I bought two more, but one got pretty expensive ..somebody else wanted him too.. .. and, well, you know how that goes on e-bay.... he cost me...
When he arrived... yes, he was sweet too...but, I thought... this is getting expensive. But, then, I had a second thought....looked him over carefully and said out loud (to nobody but myself) "why couldn't I make one of these felties"? I got some wool...some needles and gave it a try. Hahahah.... my first effort looked just like a monkey. Poor little Bo... that's what I finally called him... here he is with his model, Kirby. Thanks Norm in eastern Canada... you were my inspiration to give it a try. 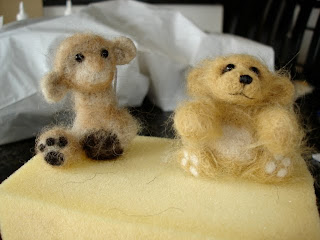 Finally he looked sort of like a bear.... I loved him. I, too, was hooked. 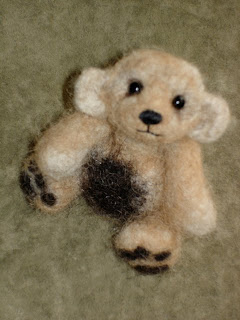 Posted by BumbleVee at 9:31 AM

The bear is cute! That was sweet of you to take the time to teach her. :)

Naaah....I'm not sweet Sophia.... it's a ploy to get some buddies to make bears with ...hahahha....oh, and also just because I love stabbing away on a bit of fluff and seeing those little faces magically come to life...

Oh he's adorable! Excellent for a first try...but, what else...she had the best teacher!!! This was just a darling post, I loved it all! Hugs, Paulette ;)

Wow- you are a great teacher, Vee! Her bear is darling. And I think Bo is adorable.

No two bears should look the same, and all get top marks for cuteness! x

He is such a cutie pie and you certainly did a wonderful job with him unlike me what I did with my dolly lol!

Her bear is a cutie, and so is yours, Vee! I'd try that too if I thought mine would turn out so well.

Little Leroy is cute and your friend must be pleased with him.
All the little bears are adorable.

I love those little bears, they look incredibly soft and fluffy.
How nice you got to help someone make her first bear.
Even if she is addicted to making bears now :)

He's gorgeous, bet she has the bug now. I remember my first attempts at felting, think your little bears were one of my fist inspirations Vee after seeing them. xx

hey Pauline....I'm glad I was an inspiration ...to somebody... that feels good.