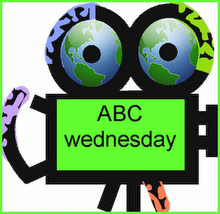 A new logo for Mrs. Nesbitt's group of shutter bugs. 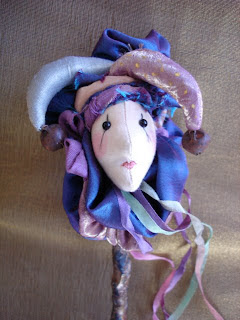 According to Wik.... a jester, joker, fool, or buffoon are names of a profession that came into popularity in the Middle Ages. Jesters are always thought to have typically worn brightly colored clothing in a motley pattern. Their hats, sometimes called the cap ’n bells, cockscomb (obsolete coxcomb), were especially distinctive; made of cloth, they were floppy with three points (liliripes) each of which had a jingle bell at the end. The three points of the hat represent the ass's ears and tail worn by jesters in earlier times. Other things distinctive about the jester were his incessant laughter and his mock scepter, known as a bauble or maharoof. 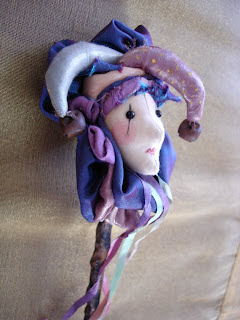 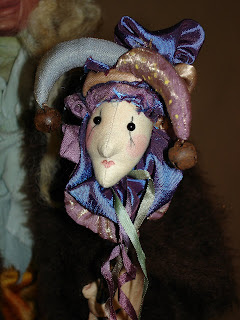 My jester is made from bits of silks that have slightly faded colours. I wanted him to appear a bit worn.... his bells are brown and rusty... he has been around....... 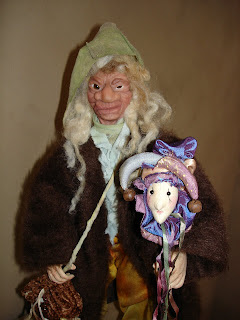 ..but, then, so has Mingus.... the traveler carrying him.

I attached my jester onto a stick and he then became a marotte.. which is..

"a prop stick or scepter with a carved head on it. Typically carried by a Jester, the miniature head will often reflect the costume of the jester who carries it." But... this time it is the jester.

They were made for a challenge called the Dungeon Master.

Posted by BumbleVee at 8:16 AM

ha! Jester is a great choice for J.
enJoy...

Thanks for giving me new knowledge about the strange word Jester. Never heard about Jester before, but with your explanation I did not need to visit the dictionary
And beautiful it was

Sorry!
Yes I meant raspberries
embarrassed
But you are the first among all the visitors taking the time to look good enough to find it our
Thanks
:)

Thanks for the jester lesson.

Thank you for the story behind the word "Jester" and all its connotations. It must have been a dangerous profession, though...

What a sad jester! But what a creative lady!

Thanks for visiting my blog. Did you see an earlier post of mine (from last saturday) about a biker run?

Yes some photo enthusiasts use those old meduim format film cameras, they love the nostalgic look to their images and they also develope the film with chemicals at home.

WOW you are so creative!!!
Fantastic!!!

Jester! Now there's a J I never would have thought of! LOL!

(Ooops! That should have said "come and visit my ABC post here" but only the "here" came out!)

Mingus has definitely been around! I'm sure you have some sort of background story on him...great character! J for Jester...perfect! You jester is a little sad, but he's been hanging out with Mingus too long.

Now that was very interesting, cute

I am responding to your hateful comment on my blog. You know, the "you don't deserve to have children" and how you want to find out where I am so you can "have them taken away."

I am shocked that someone could write such horrible things to a blogger. What you OBVIOUSLY did not stop to consider is that I AM DOING SOMETHING ABOUT IT! My business with the attorney's and my documentation of the abuse for the order of protection must remain secret.

If he finds out that he will be moving soon, then we really will have trouble. So, yeah, thanks for not using any common sense. It is SO nice to have more negativity in my life.

If this was just a simple misunderstanding, please feel free to visit my blog again. If I will be left hateful comments, then please go elsewhere. My hands are full already.

Lisa...if your hands are truly full doing something useful... I am surprised that you still have so much time to write detailed and ridiculous stories about a ridiculous and dangerous situation. If you really care about your children you would have already packed them up and moved them out.... restraining documents are a joke.... and will not serve to protect you or the kids.Trust me on this one.

You need to get a backbone as well as a grip on reality...and get busy protecting your own children ... forget trying to make somebody else foot the bill.

and.... I am going elsewhere... armed with plenty of info and pics of your children from your blog....I will make some waves with appropriate authorities on their behalf.

Visiting someone's blog and making nasty comments is the equivalent of visiting someone's house and taking a crap on their living room floor. You are not being invited back. The Fabreze just couldn't cover up the smell.

hahahha.... that's you alright ...don't bother cleaning up..cover it with more crap. It's alright dear, I wasn't planning on coming back anyway. ..but... did check to see if you are doing this on your blog too...and, of course, not. You plan to keep the pity party going over there as long as possible I am sure. However, I see that after my first comment..you have now removed plenty of the silly and all too revealing information from your blog. Too late...I've already made copies of all of it.

There is something REALLY wrong with you. Do want you want. You should be ashamed of yourself.

Great "J"!!! He's sad. But still quite precious. And I love the colors.

A 'little' creepy? That's the understatement of the year. *shiver*

Your Jesters are amazing...I am amazed you have so many of them!

Mingus is fabulous. You never cease to amaze me. The way you have set his eyes. Very mystical character. Thanks for the lesson on the Jester. It is my sons nickname.
Darly