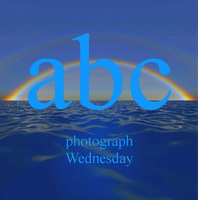 Today is ABC Wednesday over at Mrs. Nesbitt's... and I had absolutely no Inspiration ...
AT all.
"I" was tough!
I was not even going to post this week, but then, I decided ... even my lack of Inspiration could be considered an "I". Whew, enough with the "I" s already... and should it have an apostrophe "s" in this instance? probably not..but how to signify the plural...?? hmmm.... I'm sure I will get some info from my teacher bloggers...

Yesterday was a pretty special day. The postal truck screeched around the corner and ...hey...trucks!..yet again! They do play a huge part in my little life don't they? Anyway, out jumped the uniformed driver and delivered this. The "IT" in a Pay It Forward that was happening at some food blogs that I frequent. What a gift from Lewis at Table Bread. He said he wanted us to have something related to bread making as that was what we were blogging about at the time. I have just begun to bake my own bread and Lewis was definitely my inspiration for that. I never in a million years expected anything as generous as this! Thank you so much Lewis. I have yet to send my gifts to the people who offered to play when I tried to do the same. There is a year in which to do so. For some reason...I struggled to find people who wanted to play a "pay". I thought the crafters would jump at the chance...but, nope. Once again I misread things. Anyway, my gift will not be anything bread related people, so relax... I know many of you don't cook, much less bake. ... ..but something more along the lines of my other interests... crafting..... etc..... 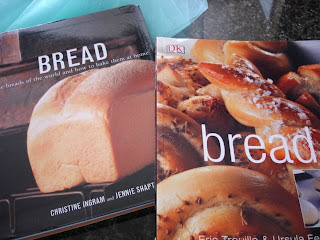 Look, the first page opened to Italian bread ! How perfect. Lewis is en route even as type..to Italy. How perfect and how unusual .... 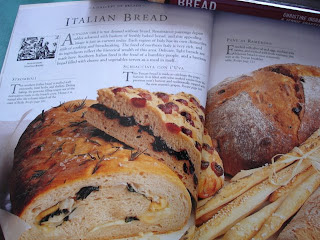 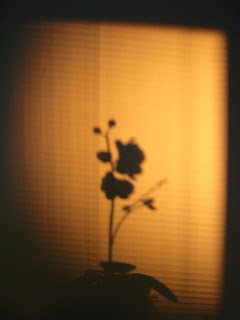 This is just something I tossed in ....

Turned around while making coffee this morning and look what I saw on the wall. The sun was coming up behind neighbouring houses.. all pinkish...making a beautiful shadow picture of a small orchid on the kitchen wall. Grabbed the camera and just in time... (things don't stay long when you rely on moving objects).... it was only there for a brief moment or two..and then ... the mullion of the window was in the path of the shifting sunlight.... after that, the sunlight had nothing to show me... well, with the exception of beautiful, golden rays of sun.....a lovely warm and brilliant day here.
Posted by BumbleVee at 8:47 AM

Lovely photo capture! So happy you notice it, just in the nick of time. :-)

Having/using a camera does help us to notice more, doesn't it? In fact, I am pretty weird with my constant crying out of; "Photo op!" ,-) But my family puts up with me.

Glad you came up with something for your post. Now I'm going to get me a slice of Italian bread...

The shadow image is great! Thanks for visiting my icy post. - Margy

Love this "I" post! That shadow was a great capture!

You asked about the new kitty litter pan I have. It is like a regular pan, with litter in the bottom. The sides are taller, enough room for the cat to stand up in there under the lid. The lid has a big hole in it so the cats can go down into the pan, take advantage of the litter then hop out. It is supposed to help with tracking problems. It is new to the cats, so they have to adjust to it. They are such creatures of habit.

Yummy... Italian bread!! What a fantastic post. I guess the letter I wasn't as difficult as you thought!!

What a great photo...a perfect capturing of a moment!

I think that you post was very appropriate for I as it is truly INSPIRED and INSPIRING. I will watch for those shadows more. I catch one occasionally, but they are so transitory.

Love the Italian Bread but that last photo is inspiring.

A pretty good post for someone who originally had no inspiration. I found I challenging too.

RE: Easter eggs and natural dyes

"Dee... may I use a portion of this post about the natural things to use for colours? ...."

Sure you can, it is for all to share.

Some one shared this with me several years ago... ;)

BumbleVee, once you get going, you have so many Interesting things to say!

What a wonderful gift from your pay-it-forward experience! You're going to enjoy that tremendously.

That's a fascinating post considering you had no Inspiration!
You shadow-orchid is beautiful.

Love that photo! How wonderful that you were there at the right moment to see it and capture it with your camera.

The bread pictures make me want to sob and whine- I miss bread! I am a carb-o-holic and love fresh bread. I just have to keep reminding myself of my how tight my shorts fit and overcome my craving for bread, pasta, potatoes, desserts, and on and on-LOL!

I love the shadow of the small orchid
Great inspiration!

thanks for stopping by everybody! Yes...it worked out alright in spite of myself...and considering I almost didn't bother. ....