Some of you may visit my food blog and some don't... and vice versa... so today ... same post, different blog for each of them. Not that the recipe is "to-die-for" ...although it is very tasty... but I think the situation is a fun one.

Have you seen Ratatouille yet? I love it; have watched it several times already. The wine in the glass moves like the real thing....... ..the looks on little Remy's face are priceless, his brother Emile is hilarious, .... maybe it is because I like to cook and know a few things about ingredients, herbs and recipes that it really strikes a chord...who knows . All I know is...I love it. And the thing of it is.... it definitely seems to have spurred me on this past few weeks. I have not done any bear or doll making at all... just having some fun in the kitchen.

Ratatouille is a common dish ... very common actually; it is a French peasant dish. Almost every cook book sports at least one and sometimes two different versions. None of them looked like the exquisite version served to the food critic in the movie. They all looked like a soup or stew and not all that appetizing to my eye.... although the ingredients were lovely veggies. But, you know how most veggies look after cooking... nyeh.... ...... and some of the recipes wanted them cooked for hours. Kept looking..... and found the original recipe used as the basis for the look of the dish in the movie. Printed in The New York Times of all places. However, it was one of those that seems pretty confusing and more than a bit time consuming. I decided to wing it and invent my own version making it look a bit more appetizing. Then, the other day, while blog hopping, I landed on the Smitten Kitchen ... and ....this! Okay...this is more like it. Simple, yet probably tastes just as great...looks very nice and the veggies still look like veggies. Copy, print, and cook.

I don't own a mandoline as she does..so the cutting takes a bit of time...but the layering is the most time consuming it seems. And... because my zucchini and my eggplant were miles apart in size...I had to compensate a bit to make it look appealing. I used two little zucchini rounds for each layer.... and cut the whole eggplant in half to begin with and then in quarters for some of the layering especially around the curves. Yes, yes...a lot of fiddling..but for the first go round..I wanted to see if I could make it look similar to the original. I like my effort.... Greg loved my effort...and it disappeared in a single sitting. 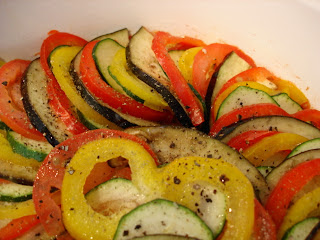 I served it over couscous with a few small chunks of Feta cheese sprinkled on top; a thick round of sourdough bread and lovely glass of Mouton Cadet.... who knows if it is recommended as a pairing for such a peasant dish .. lol ... but, after all, it is French as well... maybe the Baron wouldn't mind. All in all...a wonderful combination for us. I was happy about the couscous under our little layer of Ratatouille ... as the sauce is pretty flavourful and would have been almost too overpowering on its own. I still wouldn't mind trying some of the other ingredients called for in the original recipe and perhaps combining the two somehow.... ... hmmmm....... 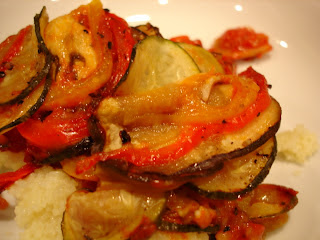 The finished dish...over couscous...still maintaining some semblance of the original veggies even though they have been baked for 45 minutes. (sealed under parchment paper)

Your versions sounds better than the NY times one! I am on the list to see that movie - I really wanted to go when it was at the theater but, as usual, missed it.

Glad to see your found your mermaid's outfit! Don't forget to use interfacing on the liquid silver to make it easier to work with - especially if it is thin or has any stretch.

Hi Judi...tx for the reminder about the interfacing and the stretchy fabric... I am sure it will need that cuz it is quite thin feeling. Hope I can get around to making a start on her this week.

I chose this one...it does have a link back to Tea and Scones I hope??? I wasn't sure which way to go. These creations of yours are simply delightful. I hope to feature them one day soon, not that it will add that much traffic because my blog is so small, but it will give me a topic!!

Thanks for the visit. You know, I had never thought of my dd being like me before. ;>

Yummmm.. that looks so good! I made a pot of beef and vegetable stew this week but it sure didn't look as good as your food.

Hey! Thanks for the mention. Your take on ratatouille looks equally as good. It's a very versatile dish! ..not to mention a great movie!

Bumble Vee? That's so clever...a nice play on words and it works so well with your blog. Thanks for the visit and the sympathy. LOL!

sweet jingle bells Vee, your'e recipe looks delicious! Must try it. I see you stopped by my place. Thanks for all the comments. I'd be happy to write a book, any ideas on how to get published? hahahaha I love your gremlins. I am so into whimsy and woodland creatures. See you around. Stay warm, (nice photography by the way)
Darly