By my calculations.... there should be little eaglets ..or maybe only one... won't know til it happens.......on or around the Easter weekend....

The couple has been sitting on the nest and incubating eggs .. sometimes she gets off for an hour and he takes over.... then, she gets back on and stays for hours.  It has to be so tiring and how weak do they get after weeks of that?  Poor thing..

I hope the eggs survive the poor weather... they certainly do begin long before winter is over around here.  There is going to be more cold and wild winds too this coming week....fingers crossed.

The Poplars are just beginning get some buds and when they fully leaf out....the nest will be invisible I'm sure.  It is in a big Poplar in a long line of them on the golf course.  Leafy branches all over the place.

I hope they are safe from stupid golfers and their wild shots on that fairway..... I hear balls whack that line of trees all day.  As a matter of fact, I, myself, have whacked a couple...albeit a lot closer to the tee box than the guys hit them.  Some of the shots will definitely make it to that particular tree.  Darn it.

The other day, one of the eagles was sitting on the tree right near our house.  Just sitting there.  Preening.  Picking.  Trying to find something to keep himself busy.  Basically just hanging out.  All alone.   Of course.  Missus was on the nest.  I can only tell it was him because he doesn't have the tiny black mark on one of his tail feathers that she has.  It is really the only way to tell them apart unless they are sitting side by side as she is slightly bigger than he is.

Then he began to stretch one wing ...this way and that.... and then, moved them both around and spread them out a few times ... .... and, then... kind of turned around and hopped up and down on the branch a few times and took off.

He sailed around towards the nest in a huge figure 8 and bypassed it.... then circled.. and onward and upward .... OMG did he go up!!  I've never seen them do that before although once in a while I see some hawk or big bird (could be an eagle) fairly high...but, this guy didn't quit.  He went around and around in huge circles ... and, so high that finally I could not see him anymore!  It brought tears to my eyes.  So Amazing. Hardly even flapped a wing.  Just soared on the currents.  Once he made a slight adjustment with tail feathers and one wing and then... just upward he continued.  In such huge circles. Unbelievable.  I watched him for several minutes..til he disappeared way up there.  Totally out of sight.  So beautiful.

Here he is before he began his stretches ...just looking bored or ticked or ... lonely, or something..... then, he did a few calisthenics and off he flew almost into the stratosphere .... no wonder he decided he needed to do some good stretching. 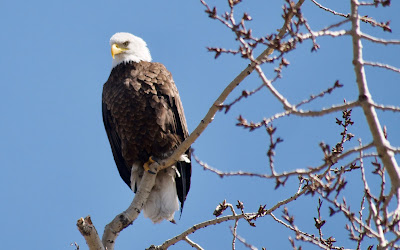 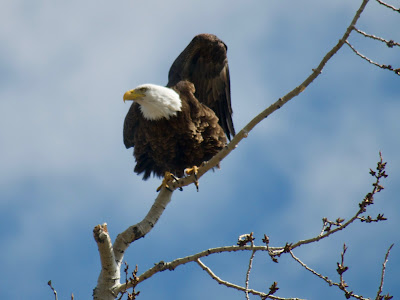 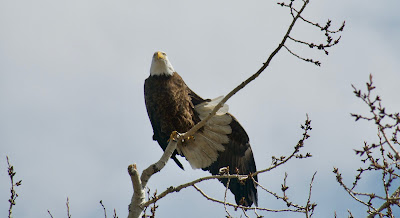 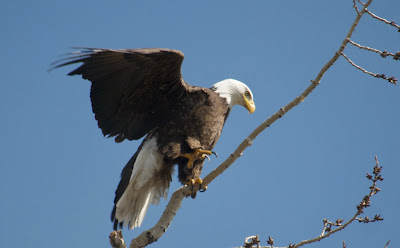 This is the last one I could even focus on him... he was going in and out of clouds and mist by this time and then.... I couldn't even see him anymore. 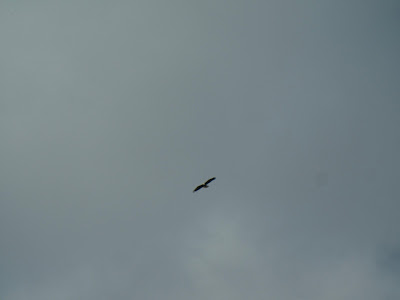 Posted by BumbleVee at 8:42 AM

Lovely bird. We have falcons to watch every day soaring about.

He looks so majestic. It would be lovely to see the young ones

Thanks for coming by to see my eagle.
Oh, lucky you with falcons soaring around ........ aren't birds just amazing....
I love to watch them... and, feel so lucky to have this guy and his Missus nearby .... it's the first time I have seen eagles.

I sure hope I get to see the babies.... but, the leaves will probably cover the nest so I might not see them til they are bigger and learning to fly.... maybe then..... but, I'll sure keep my eyes peeled for anything at all from now til I don't see them anymore that's for sure.....

so fun to read about the eagle - ...enjoyed the post a lot.

forgot to say - i follow Big Bear Lake Eagle Nest Cam photos. Shadow and Jackie just had their one eaglet hatch a month ago or there abouts. Baby eagles are so darn cute.

By my calculations...from when I saw the eagles mating... they should be having little eaglets sometime around the weekend coming up... and the past two days have been horrible for wild high winds over 80kph... She was waving around up there in the nest probably getting seasick, poor thing. I know I would have ....

How exciting to watch the eagles nesting! I hope they also stay safe from the golfers.

hiya Serena... thanks for having a look at my beautiful eagles.... see how I make them my very "own"? .... hahaha.... they are certainly safe from golfers today but honestly...it is the most rotten weather. Snowed overnight another inch...arrrghhh!! where is spring?? It is -4C and going down to about -12C tonight.oh, I do hope all the Mommy eagle's feathers are going to keep the eggs warm enough.

I loved reading your description of the eagles. We have a few around here but I have yet to see one...they just recently came to this area. The birds I most enjoy watching in flight are the vultures. We had a huge influx of them a week or so ago that came twice a day to soar over the river that runs right in front of our building. There were probably well over a hundred of them. We see the huge flock and then all but a couple pairs move further north. They then return again en masse for a couple of weeks in the fall on their way south.

hey there Magpie .. thanks for coming to see my beautiful eagle... am happy that you enjoy reading about them. As you can probably tell...I do love talking about them!
Wow... what a thrill would that be to see all those huge birds soaring up and down the river! It would give me goosebumps for sure...
It is horrible weather this week so I sure hope the eggs or very soon..the babies will be okay. It is snowing lightly all day today...again... seems another inch each day right now... with winds and cold...-12C with wind equates to -18C wind-chill or some damn thing. I hope it warms up soon...I sure hope they are able to keep the eggs or babies warm enough... not much action over at the nest today.... fingers crossed they are all okay.....

Hi Vee how are you doing?