This is our little dog, Dude.  I found him at a country fair in Armstrong, B. C., many years ago.  I love that little guy.

He doesn't eat much, doesn't have to go outside and doesn't shed.

I put him up on the table while vacuuming and he was seen sniffing the carnations.

"Take some time to smell the flowers"

Oh, alright, I didn't actually hear him say anything....that could mean I'm totally bonkers... when in actuality, I'm only half way there.....
but, if he could have....he definitely would have done so.  I know he would. 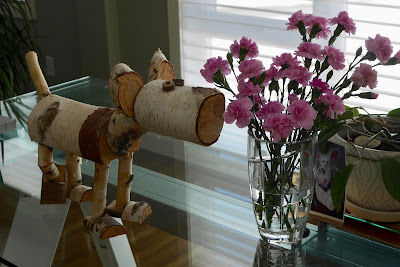 Oh I can see he is a faithful companion of the very best kind, very handsome!

The best kind of pet! And cute too.

I love it. What a cute art piece!

I love Dude..That's the kind of dog I need!!

He's cute! And apparently quite talented.

Dude is the BEST! I love his happy expression.