Yep....I did it.  There I was merrily plucking out a few stray hairs and trying to clean up the nose area where I wanted to embroider his nose.   All of a sudden I realized I was looking at the fabric under the fur, not the fur...damn!!@#  Somehow just plucking on a few hairs had already gotten me too deep into it and the fabric was laid bare.   How could I have been so stupid?  I wasn't even in the exact centre of the nose for heaven's sake.  Me and my eyes.  Very frustrating.  Like I mentioned, they have gotten worse, and, even working with my big magnify9ing glass I still did a stupid thing.  Sigh......................so bloody annoying.

I was contemplating tossing the head in the bin.  Or wondering if I could just make a huge nose and cover up most of the mess...or maybe pluck out some on the other side and match up a bare patch and make a bare fabric snout surrounding the actual nose.  None of the those options appealed.

When Mister BumbleVee came home and asked how the bear making was going I told him my tale of woe.  He said, "Can't you just needle felt some fluff back in?"  HUH??@#!  How the heck would he think of that?  And, of course, at first I poo-poo'ed the idea saying it was rayon and it would probably leave big holes in the fabric and I didn't think it possible to get any kind of result..etc...  but, then, I thought about it and did dig out some felting needles and plucked out some of the rayon curly fluff from near a cut edge of the fabric I was using and needled some into the bare patches.  SUCCESS!!  Wow.  that really worked.

He had remembered that I needle felted a nose onto my scratty bunny.. and figured it could be done on any other animal I suppose.  I do remember doing Eddy, but it was lovely mohair and you can needle felt to your heart's content on that and not ruin it.... rayon, I was not so sure about.  But, I'm hear to tell you....it can be done.  It doesn't look quite the same even when I try really hard to find some shiny new long pieces of fluff..and, try not to needle it much .. so the curls stay a bit...but, it covered up the bare patches and looks great.  His whole snout area looks lighter anyway for some reason...probably because I did snip and trim things a bit ..trying for a nicer shape to the snout.

Click on the pics for close ups....the eyes and also the nose are "test eyes" ... things will move or change in size for sure.  And, his nose will be embroidered. 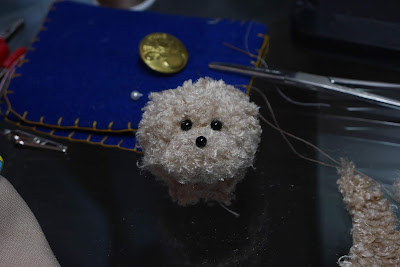 Unfortunately, I didn't take any photos of the bald patches .. so you could see how wrecked the poor little guy was.  But, I do have photos of the fixed areas...and, I can't even tell you where they were really.   Somebody looked petty smug when I showed him the result.   There was a big cheesy grin.  He totally expects to get equal billing when we tell anybody I made the little bear head ornament on the tree I'm sure... and, well....he should....

It's weird when you think your guy is not really paying much attention to what you are doing hobby wise...and, then... they remember some reeellly important thing to help out when you totally forget about ever having done it.   Strange that........ he's definitely a keeper.

This is the first bear I made with this rayon fabric.  A wobble jointed bear named Leonard..he has a ladybug on his foot.  I knew it was a bit tricky to work with ...but, I went ahead with him anyway and he turned out fine.  Very cute actually... so I thought I would use it again.  IT gets a bit matted and flattened after handling and honestly, with rayon? ..you cannot, and I mean CANNOT just fluff it up or brush it out...it fuzzes terribly!  So... my advice ... mostly don't use it.  The chin gusset is part of this guy's nose area...it is softest suede as are the paw pads. 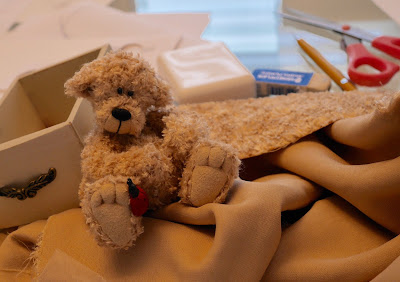 This is what I plucked out to use for needle felting into his nose... the edge bits of some of the fluff.  If I tease it out gently...it doesn't fuzz or get dull .. and, then..try to needle it in with a bit of curl in place.  Tricky, but only jabbed myself one time...ouch... those needles are reeeeellllly sharp..  and then, you do have to wait a bit for the bleeding to stop before continuing. 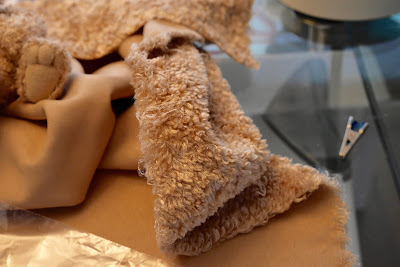 Here is my Scratty Eddy bunny that I made years ago.  The white snout is all needle felted wool with a pink embroidered nose.   It felts easily into lovely mohair like this...but, I wasn't sure about how the rayon would hold together for repeated stabbing ...somehow it did just fine. 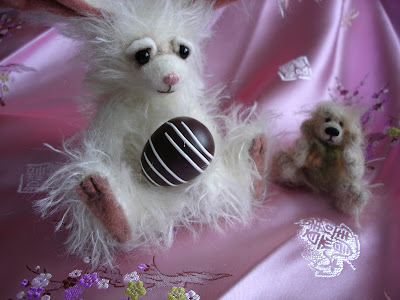 Posted by BumbleVee at 9:39 AM

Your husband sounds much like mine - he never says much about what I'm doing but every once in awhile he suggests something that works perfectly. And yes, those needle felting needles are vicious little creatures when they come in contact with your fingers. Oh - and I have to tell you that when I read about plucking out nose hairs I didn't realize that you were referring to your bear and thought you were plucking your own nose hairs and all I could think was 'ouch'. Very greatly relieved when I discovered you weren't self-inflicting THAT much pain!!

You are very clever despite your eyes! Enjoy what is left of the week, Diane

You know..we never think they are listening...and then he comes up with the solution. What the heck??!