So, I drove over to deliver some books....

.... and, erm.... wasn't quite sure if I should get out of the car when I saw this on the lawn.  I know elk can be dangerous...but, a deer ...well, I suppose if they get spooked or ticked...they could lash out.  But, the thought of seeing that particular elk almost kick an idiot that was photographing it lingered in my brain ... I sat there for a few seconds more.

It doesn't look that big in the photo...but, man...that head was huge when I was standing closer... the ears alone had to be about 9 inches tall ... no lie! 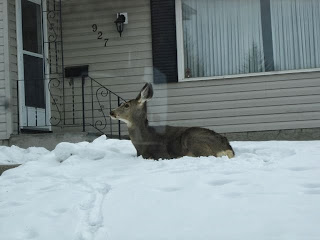 Finally, I decided she didn't seem to be too bothered by me... and I also noticed there was another one on the neighbour's lawn....and  .. . a third, much smaller, one on the lawn across the street....what the? ...??  The place was positively littered with deer!  What's going on here? 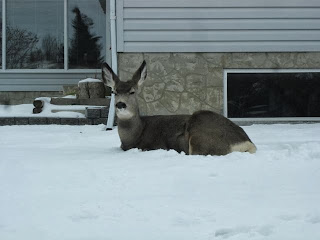 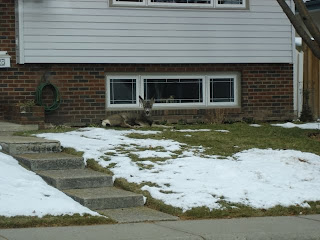 I was even a bit more concerned now... what if they were guarding the smaller one? ..or worse yet... the little one was wounded or something... I sure didn't want to scare them up and cause more damage if they felt they had to move in a hurry...

Still I sat there and waited ... then, decided I would get out quietly, walk up the lawn about 20 feet over to the left of her and just talk softly, to nobody in particular, while doing it.  I had to go behind a big shrub too...so I quietly warned her I was about to saunter out from behind it as I was doing it... managed to sidle along the lower part of the porch and got to the steps that way...whew...she didn't even budge... and I found out they had all been there for some time already.

I was there for several minutes.... quietly went back the way I came;  got in the car and drove away.  Then, thought...darn it, I wish I had my camera.  Went to the bank to do some business... drove home, got my camera and immediately drove back.  They were still here.  I got a shot of each through the window so I didn't scare them off and drove away.  It made my day.

How lovely to see the deer there, they don't look like they are worried at all by been photographed.
Stay warm and enjoy the rest of the week
hugs
Carolyn

They're beautiful! At first we thought the first one was stuck in snow until we realized it was laying down! MOL! We have neighborhood deer too but thankfully we don't have snow!

You tell a great story V, and I am still laughing!!!
I'm wondering if it is Deer Hunting season in Alberta? it is here. If so, maybe they have figured out it's safer to hang out in the suburbs... nobody is shooting there... or possibly they are looking for a job as a lawn ornament for Christmas. A few carrots and your decorating is done. Cheers!!

Wow...how strange though. I also can't get over that pile of snow you have there:(

Yep my first thought too...stuck in the snow! But to be just hanging around, three of them?! Strange indeed. My second thought deer hunting season...safety in the 'burbs! Thanks for sharing a great story.