I tried hot soapy water...and even though they say it is water based... which I say is silly anyway..how can that protect hardwood if it is water based? .... hmmm  ... makes no sense to me but, then, I do seem to be the only logical person involved in certain conversations .. 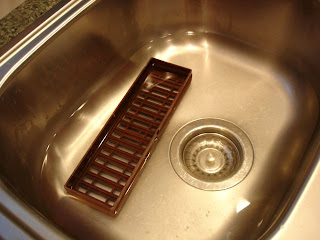 Then I tried prying it with a knife....and hitting it with a bottle with a hard plastic lid..on the only bit that sticks up above the sliding part... and it only sticks up about 1/8 of an inch at that .... too hard to move with my fingers... it just hurts.  My thumb is good and sore now.  And, if I break it off...they are toast.  Apparently they don't even make this size anymore.  One finally moved and is now operational.  I haven't even counted how many more to go... and all but one are stuck in one position or the other.  All.But.One! 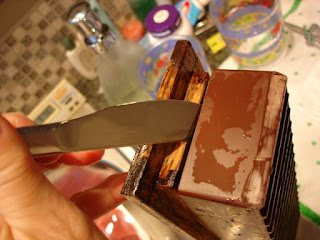 This is the problem.  Somebody in their infinite wisdom decided to stain and seal the hardwood grates without bothering to take off the plastic bottoms...which houses the opening/closing mechanism.  Soooo ... they are now stuck open ...or closed.. depending on how they were when said person took them out of the openings in the floor.

Why on earth didn't they just remove the two tiny screws that hold on the lower plastic piece.... and stain the wood separately from the plastic and then... gee..... screw back on the plastic part when things were dry?  How hard would that have been? 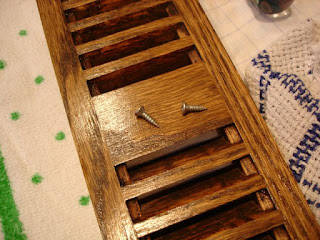 Is it so much to ask for a tiny bit of common sense?  And everybody seems shocked or insulted if you say anything about any of it to them.  Good grief.  Has it come to this with every darn thing?  Yes... let me just answer my own stupid question.  Yes it has Veronica.  Did you even have to ask?

Now ...I've rigged up my own little tray of tinfoil and am soaking the plastic piece in Paint Thinnner ... aka Varsol...  that outta do it.   Hate the smell...hate the fact it totally wrecks hands... which are already dry and not happy with the current cold spell... so it's all out in the garage.

First off, protect you hands with rubber gloves lady. It's the smart thing to do. Secondly, I'm glad you answered your own question. Men do not ever, no, let me rephrase that, men do NOT EVER think of cause and effect. It's too much for them. Two little screws? Why would anyone want to move anything? It's painted/varathaned/polyurathaned, so that should be enough. Their job was done.
Good luck, I hope some female out there has some useful tips for you.

I was going to suggest paint thinner. Next, replace the damn thing and send that bill to the knucklehead who did that.

it's true. it happens almost everytime in some strange way in almost every situation.... I don't feel so odd anymore.. thought I was the only one that no one ever listened to. we have something in common. Hang on!

My only suggestion would be acetone nail polish remover. Might help.

you might be able to find someone who could make you some more of them if you took one to them?