It's Tuesday already....now I'm totally lost on time altogether...acckkk!  oh, well.... blame it on my lack of marbles.  I just hope I don't lose the last three or I'll be done for.

The lilacs there were in full bloom...we are a few weeks behind... mine only just have buds and more greenery than last week...but, not fully leafed out even now....look at these!  And, so fragrant..... mmmm.... 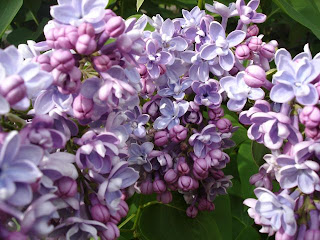 Hardly took any pics, though .... too much happening...not the least of which was my poor sister having to go to hospital in an ambulance because she was weak, dizzy and nauseous at 4 a.m.  She has had a pretty stressful time of late so I was taking no chances...we called the ambulance.  Better safe than sorry as they say....the para meds checked her blood pressure ... high..... her heart rate... slow....only 53 .... listened to her chest and practically threw her in the ambulance.  She was gone in less than 6 mins. after they arrived.. panicking about her horses and cats.  I assured her I could feed them til she got home and off they drove.  Shocking and scary. ...for us both.  I kind of just stood there rooted to the porch for a moment.... wondering what the hell had just occurred in the space of so few minutes of our lives.

They gave her fluids and monitored her for a few hours...and then one doctor had her roll on her side...then her back..then the other side and when she almost vomited.... decided she had ear crystals....... and showed her a trick to more or less get them into a better position within the inner ear.  She could immediately stand without falling over and with almost no nausea.  A miraculous little trick... but it doesn't totally fix things.  It'll be days to weeks to months...and apparently, because of her previous brain injury...maybe it will never go away.
I remember someone telling me a few years ago there is a video on youtube about a manoever to help the dizzyness...  Dix-Hallpike manoever I think it is.... there are several different methods of rolling and extending head over the bed etc... and various names for each according to whose method it is and for what specific purpose they use it.  There is more to it than just crystals methinks after reading about labyrinthitis and crystals.... however...it got her home and she did a lot of resting for another whole day..not herself at all.  Very weak and unable to do anything.

She will be at the doctor this week for sure to get a complete check up.... you can imagine I was almost afraid to come home.

Cleo wanted to come home with me....I'm sure she did.   You know how they love suitcases.... and she was happy to show me that her fur colour went with everything.... 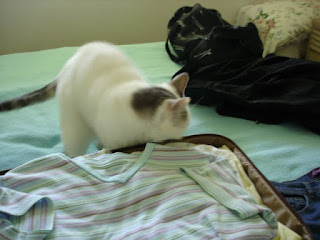 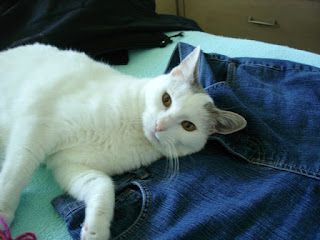 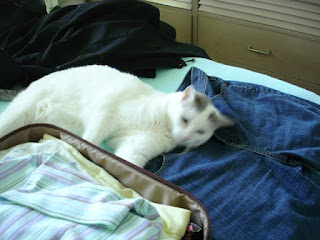 Your poor sister. I've heard of labyrinthitis, but not crystals - that sounds most unpleasant.
After our glorious weather, we have had a cooler, grey day. Fingers crossed that it improves for the weekend, when we will be celebrating the Queen's Diamond Jubilee.

Oh what a traumatic time for you both - hope your sis is soon on the mend and feeling more like herself. Do send details for an ATC - no worries about a swap - you have enough to think about but one of mine might be a cheery little "hello"!

Gosh - your poor sister! Not a fun thing to live with.

Sounds like you have been super busy. I totally would have packed up that kitty for a trip home with me. Cute!

Hope your weather keeps being ageeable. We had snow on Sunday. Gaak!

Oh, gees, how SCARY! I sure hope that she is doing better. She has been through so much--I wish her some healthy time now--with a whole lot less drama. Sending a squeeze for you both. :)

Oh my goodness that must have been scary. I could see being leery to come home.
My daughter gets vertigo. It can last days to a week for her. I only get it for a few seconds.
Not the same as your sister, but not very nice.

WOW VEE !!!
I thought I was reading about myself there.
First the lilacs are goggeous.We cannot grow them here in the South.Just to hot.
The cat...I wish I could have him or her. What a beauty.
I was in the hospital this thursday and Firday with the same systoms and heart rate.But they call what I got...Vaso Depressor Synope.
Thats when your blood p. goes up,your heart rate goes down.Mine was also 53.
Anyway it was not fun.It took 4 firemen to bring me down from the highest bleachers at the football stedium. Thats where We were sitting during my grandsons graduations. Horrible.
I hope your sister is doing better.Its taken me three days to regroup myself.
Please excuse all the misspellings .
Anyway.When you get time go by my blog and see what I'm doing Ok...and please pass the word.I'm doing something different.Or should I say the best I can.
Please also give youe sister my best wishes.
XXOO Marie Antionette

Hi Vee, sorry to hear that your sister is not well. That must have been a very scary feeling for you, seeing her like that. I do hope that you are feeling much healthier, yourself. Take care my friend and wishing your sis a speedy recovery. Big hug. MV.

Hi Vee, sorry to hear that your sister is not well. That must have been a very scary feeling for you, seeing her like that. I do hope that you are feeling much healthier, yourself. Take care my friend and wishing your sis a speedy recovery. Big hug. MV.

Hi Vee,
So sorry to hear of the ordeal that your sister and you went through. How is she doing now?
Sending her healing hugs

So sorry to hear about your Sister and do hope she is feeling better now and can get the problem sorted.
I love sweet little Cleo and know how easy it would be to take her home with you.

My goodness Vee, how fortuitous that you were there at that particular time! Such an unsettling experience for your sister, but it would have helped her enormously knowing you were feeding the animals etc etc and generally 'holding the fort' in her absence.
Those lilacs are gorgeous - can almost smell them way over here :D)

How odd...I kinda thought I'd already commented on this post. Maybe I was going to but got distracted...that happens a lot around here. Anywhoo...

OMG!!! What a scary experience for you and your sister, Vee!!! I remember having one helluva of vertigo attack a couple of years ago and I seriously thought I was having a stroke. I was vomiting too from the dizziness. I couldn't stand or even lie down because the sensation was more intense...I remember being on my hands and knees for ages before I felt it starting to ease and I was laid up for the next 48 hours with exhaustion. It sounds like your sister's attack was so much worse, poor thing. Thanks for the info on that Dix-Hallpike manoeuvre...I've never heard of it before.

How is your sister now?? I do hope she is much, much better.