Contrary to popular belief...I am still alive and well.  I've just been totally lax in the blogging department and certainly haven't been crafting or making anything of interest....unless you count the great muffins and scones that come steaming hot out of the oven...on a hot and steamy day!  This morning it is cooler, cloudy and a bit drizzly.  A perfect bread baking day!

After being down and out for so long with the rib injury.... I have been overdoing it since they got better enough to swing my golf club.  Now... this week...my ankle is a bit of a nuisance.  I'm just not as strong and healthy as I think I am I guess.  What else is new?

My garden suffered while the ribs were bad...and I am trying to dig out some anemones that have totally taken over in every corner of every garden area.  I think that is part of how the ankle got bad in the first place.... well, that and stomping around the golf course.  I used to think that golf was supposed to be relaxing...but, it seems to me that we always have to hurry and it makes me irritated.  Especially my ankle.  They never tell the men in front of us to hurry up.... it is only if women are in a group that any of the marshals ride over to give you the hurry up sign..... hmmmm.... still the old boy's club ain't it?

We've also been chopping down the hedge between us and the neighbours,   It has been plagued with aphids and some other blight for the past few years...time for a fence and just some nice limestone rock along it.  It will widen the yard by a few feet and look much tidier.  So...that also means bundling and tying up all the cuttings... trying to get them to about 4 feet lengths..so the garbage guys will take them.  And..putting out only 4 bundles per garbage day...which is running into a month now.... maybe I'll try 6 bundles next time...but, eh....maybe not..he has been taking them... and that's a good thing.  The minimum charge at the city dump has become a lot more since I used to take things.... plus the charge for the weight of the load..... it gets silly....... so I'll resort to even sillier and follow their ever more stringent rules for garbage pickup.  If our black bins are not full...they don't take anything else sitting out there now.  So...we have to fill it up with bags of grass or other stuff... so they take any of the bundles of hedge sticks.... sigh...... they even left a chunk of carpet behind one day because my black bin was not full enough.  good grief.

While I golfed on ladies night...Mr. BumbleVee cut down more of the hedge..til he got stung by a wasp from a nest down in the dirt under it..... but, before that...he found a tiny nest with this little egg still in it and saved it because he knew I would want to photo it.  Don't know what type of bird it is... and hope the little hole in the egg is one made by the little bird himself and he made it to safety.... I don't want to know if it  isn't large enough for him to have gotten out of...... I'm pretending it is. 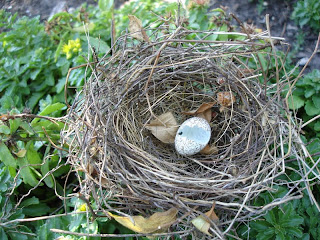 Posted by BumbleVee at 8:34 AM

We have all sorts of rules about what goes in which bin - we have two, but folks in town have three, as they have one for garden rubbish. Look after your bones!!

Sounds like you have been one busy gal! Hope your ribs are feeling better. Hubby hurt his and he hasn't been able to golf for a week. He has been pouting about it all week.

Hey girl...glad to see you posting!

The garbage pick up in you area sure sounds finicky! We recently were given a second wheelie-bin so now we have one for household rubbish and one for recycling. I'm in heaven because it was terrible trying to deal with one wheelie bin which had a divider inside (one side for rubbish, the other for recycling). It was never big enough with our large family.

Sorry about the ribs and ankle. I was recently diagnosed with Rheumatoid and Osteoarthritis so I've been dealing with a lot of pain myself lately. I sympathise with you.

I don't want to think that the baby bird didn't make it out of the egg either. Nice pic tho!

Have a great weekend (it's already Friday here),
Serena :)

Sorry, I don't imagine the baby bird made it out of the egg. But I think if he/she had made the hole, he/she would have continued to try to hatch. It may have been made by a predator bird (house wrens do that kind of thing).
But anyhoo, I'm glad your ribs have healed so well. And I wish I could get some bushes cut down at the side of my yard, too!

:/ ouch, sorry to read about your ankle. if it really is just the women that are being told to hurry up, you need to say something to someone.

I love anemones :D think they are gorgeous.

Hi Vee, nice to read you've been getting out and about and playing some golf. I expect you and your golfing ladies let the men know, back in the Clubhouse, over a few drinks and a laugh ;-)
Good to have a bit of a change in the garden isn't it. A hedge does take up a lot of space... yours definitely sounds like its use-by date has been passed!
Love the photo of that pretty egg in the nest. All the work that's gone into making the nest never ceases to astound.
Cheerio for now and all the best :D)

Love the sweet nest and birds egg.
So sorry to hear about your ankle and funny how aches and pain seems so much more unbearable. I have a stiff neck and backing out of our drive gets me. Hope you feel better.

Glad that you are out and about playing golf and gardening.
You would think your rubbish collector would be even more happier if you did not have so much.
We now have a wheelie bin for rubbish and one for recycling which is great.

Have a good weekend
Hugs
Carolyn

Well make the most of the weather and hope your ankel gets better soon. Wish that bird had hatched.