Or, perhaps it's Mrs. Murphy's Law.  I bet she had lots of kitchen disasters... and, after all, it did occur in the kitchen.  Let's face it... mostly the k-room is the domain of women. Okay... I'm not saying my mister didn't come to my rescue for the past month.... and, he did an amazing job of showing me up totally.  But, you know...usually.... (although, I do have to qualify that too I guess ... because it seems like cooking is quickly becoming a thing of the past with some and being reprised by others in special blogs and writings...  .. another of those "lost arts" I guess .... )  Actually, come to think on it.... I only know one woman in my real life circle who likes to cook or bake anymore. (it's only my blog buddies right now who love creating in their kitchens)   I can't believe how many women lately have stated right out loud that they don't and won't cook.  Shocking to me.  I love my own cooking.  I prefer knowing exactly what goes into MY food, thank you very much.  I've spent some time in restaurant kitchens....ick... no wonder I cook.

Ennyway........ back to the story....
Before I had the surgery on my wrist.... I did a lot of baking so I could freeze a few things because I knew I wouldn't be able to bake for several weeks.

The prune plums...or Italian plums as they are sometimes called.... were just arriving at the stores.  Darn it.  Obviously I wasn't thinking clearly ... why didn't I just buy a box of them and cut and freeze them?  Darn it again.  Now...they are long gone ... and......

I only managed to make up one batch. But, since the recipe was large enough for two loaves, I decided to use my bread baking pans.  Bad idea.  It's not that they are bad pans... they are great for bread......but, just that for these particular loaves...they didn't do the job.  Even buttered and floured....this is what happened!  I have no idea why. 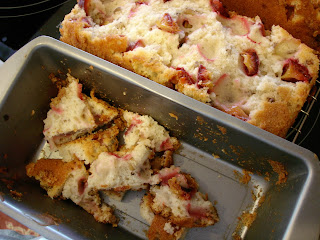 We scraped out the bottom chunks and put them into dessert dishes and had them with frozen yogurt while they were still warm.  I have to say they were very yummy.  It is a great recipe.... it just didn't look very wonderful on this particular day. 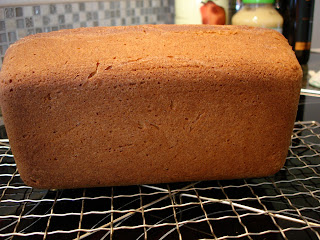 I've baked for years...and rarely does something like this happen! 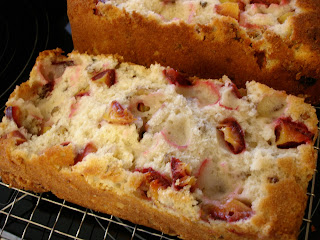 Some time ago, I tried to adapt a recipe for a yogurt cake for a friend who doesn't eat wheat or dairy - so I made it with soya yogurt and ground almonds. It took me three attempts as I burnt the first two (I blamed my new oven!!) I don't really bake anymore, as I need to lose weight, but I just don't understand women who don't or won't cook. We always have our meals planned (Malcolm cooks too) sometimes several days in advance.

i think my husband would say every day is a disaster .. sigh

Ah, no, I LOVE to cook. I love to eat what I cook a little bit too much too, LOL. My worst disaster was the time I made beef stew and grabbed the wrong box when I reached for the cornstarch to thicken the broth and ended up with baking soda instead. The whole mass erupted out of the pot like a volcano - not exagerrating, LOL. The resulting mess took ages to clean up and it smelled so bad that even the dog wouldn't eat it.

Every time I cook it's a cooking disaster... so it's really hard to share just one story... :)

Glass bottom pans rule (at least with me). If I am forced to use
metal, I line with foil and it seems to work.

Regardless - I can almost taste how yummy those warm scraps were with yogurt!

Hope your wrist is healing well!

What a cool disaster. I don't mind disasters like this they are worth it.he.. he...

I hate cooking. I can do it, but since I hate it so much I consider stepping in the kitchen a disaster even before I start;-)

Oh and, that loaf looks really yummy! Especially because we can see what's inside!

Hi there! How nice that your hubby was able to help out after your surgery! Both me and my hubby cook, and often cook together at the end of the day. Preparing dinner is a great way to reconnect after work. And we love knowing what is going into our meal, too! :-)

eeeuuuwww JudiA.....at least we had chunks of yummy plum loaf to eat.... hahahah.... oh, sorry...laughing at a fellow foodie's disasters isn't very nice.... hahahha...oh, but, it's great to know we all have occasional kitchen messes....

frayed......I wonder if the ground almonds would require a much lower temp? just because nuts have a high fat content... must Google some ground nut recipes now...hmmmm...off I go to do just that....

It's a shame it broke up, but looks yummy just the same. Is there such thing as loaf-tin liners where you are? x