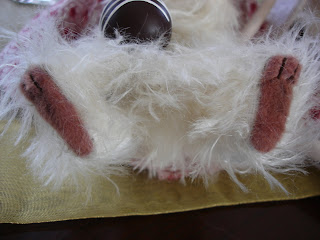 His feet and legs are on... a bit of shading... but, not too much.  It shows more in real life than it does in a photo....  AND...he has a death grip on one of those chocolate eggs..... (I have to tell you that those eggs are not real because some of you sounded like perhaps you thought they were tasty ... lol) .... nope, just faux chocolate eggs.  However, even my sweetie reached for one last year when I had them on the table taking photos of bunnies and eggs...so... they are pretty real looking.  This year he glared at them and said.."oh...those eggs again.  Where's the real chocolate?"

Off I go for some brekky and to make a little pouch for some shot for his tummy.

Oh, that reminds me.... a few years ago when I was making a lot of the little guys, I decided to make little pouches for the weight I put inside of them.  If it was really tiny 'shot'...almost like seeds... I was worried that an occasional little seed would work its way out through the joining of a seam.  So, then, I was joking with my sister that we should start a little company and make up many bags or pouches and sell them.  But, what would we call our little venture.  Her responses were hilarious... my fav being "Shot in the Ass" .. or maybe it should be "Shot in the Arse"  ...we debated the "roodness" of it.  But, that WAS the general area where most of the pouches would eventually sit. Then there was "Lead Bellies"...but, we thought people would be put off by the word lead..even though it is actually steel...however, "Steel Bellies" didn't sound quite as fun..... although then we moved on to "Abs of Steel", or "Buns of Steel", which we ruminated upon, but thought there would be copywrite or legal issues.  All in all, we had a fun time of it at the expense of the little bears and bunnies while they looked at us with quizzical faces.  In the end, of course, we did nothing....I still stitch up a pouch and fill it with shot when I need one ... and still have a laugh at our silliness.

AND:::  Have to share this one.... hop on over to my other blog to see this recipe for Brussels Sprouts
Posted by BumbleVee at 8:24 AM

You are too funny. Perhaps the bears also have a bit of a laugh on the side.Lol!

Love the little fluffy feet and 'arse' and also love the various names that you and your sis came up with for the shot pouches! My fav is "shot in the ass" (or 'arse')

Abide in the Word said...

You are so funny.....and so creative! Thanks for the smile and laugh!
Bear Hugs and Blessings,
Tomi
Bramblewood Bears

Oh Vee, thanks for the laughs! You are a Riot!

Brilliant!!! And all those little feet are so o o perfect!!!