Why do they do it?  I can't find anything scientific on it... only anecdotal evidence really... have you seen it?

They run into the yard... poke around in our decorator rock in the garden areas..select a rock .. sometimes they lick it a few times... get it situated in their mouths and run off with it.  They sometimes only go as far as the lawn... and, bury it.  Then, come back for another.  Last spring we found dozens of them in the lawn when we had it power raked.  We spent a lot of time plucking them out before running our own mower over the grass ...

Sometimes they take them across the street into neighbouring yards.  Apparently they are 'scatter hoarders'... meaning they put things all over the place for future.. what? with rocks? .. who knows ..

Often I find a quite large one on the sidewalk or out in the middle of the road... too big to get very far and they drop it and leave it I guess... most of the rocks in the yard are about 2 inches and bigger... we still have some that are from a previous batch of only smaller ones ..one to two inches .....but those are disappearing quickly ...  they try poking around for those and then..just pick up a larger one and go with it... it's crazy... the one he has here is about 1.5 inches by about 1 inch.... the photo is a little dark, but click on it to enlarge and you can see it better. 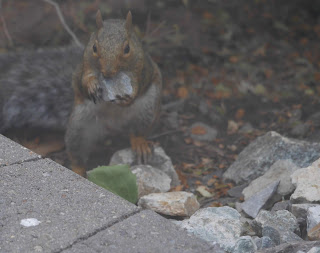 Posted by BumbleVee at 9:14 AM

Crazy lol,, I know they lick rocks to get the minerals from them, clever squirrels,, but thieving lol,

This is a behaviour I've never witnessed - interesting!!

Very odd! Would be interesting to see what they're doing with those rocks! Our squirrels take acorns which makes more sense.

That's a funny observation! May they are building something - and think they are Wall Nuts!!!

Well you got me really intrigued with this one Vee, so much so that I did a search (early hours, couldn't sleep lol)... seems they use rocks as part of their nest-building materials, so stop it getting blown away in times of storms. Clever! but I can imagine what a nuisance getting them scattered all over your lawn :D)

Oh my gosh! I thought it was just my squirrels that do that! I find the stones in the center of my grasses all the time!